The Tomorrow Children Out Today on PS4 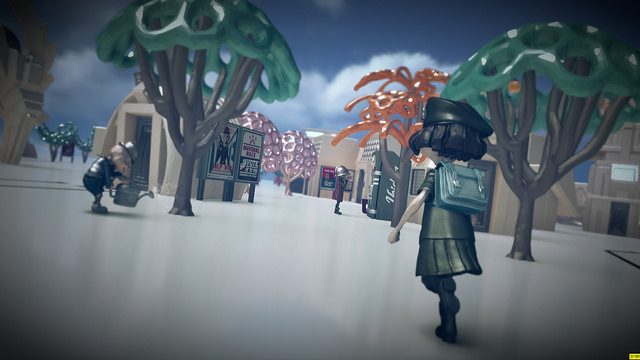 Comrades! I’m absolutely thrilled to announce that The Tomorrow Children launches today and everyone is welcome to jump into this strange neo-Soviet alternative future we’ve created!

The Tomorrow Children is a game quite unlike any other. It features elements of action, simulation, strategy, and social gaming all brought together in a unique alternate-reality, sandbox world.

As a projection clone, you must work with others to restore an annihilated human civilization to its former glory by gathering resources, expanding and customizing your town, constructing defenses, and fending off the “Izverg” Kaiju monsters.

With tremendous support from our community during our open beta test, we’ve been able to make a number of improvements to the game in recent months, some of which I have outlined below. Thanks again to everyone who took part and helped us hone the game — there will be more adjustments and new features added in the coming weeks.

1.) Town Restoration
By reviving Matryoshka dolls and reaching the target population, your town can be “restored” (To glory, comrades!). Those making the most contributions to the restoration will be awarded special points which, in turn, can be exchanged for building permits, new void powers, and a bunch of other cool stuff!

When a town is restored it will be frozen for posterity so that you can move on to a new one. You can always revisit your previous towns and later in the year and we are planning some fun stuff for these “completed” towns.

2.) Comrade Summons
As reward for your labor you’ll earn official coupons which can, in turn, be exchanged at the residents’ store for a Comrade Summons. With this you can invite up to five other players to The Tomorrow Children for free. All you need to do is copy the voucher code displayed on the Comrade Summons and send it to your friends via any means.

Voucher codes redeemed will give the player an entitlement to play the free version of The Tomorrow Children as the proletariat (this will be included in an update to be released in September).

3.) Toil Chips
Toil Chips can be found on the ground at random and will allow you to earn extra “toil” if you collect them. Also, the Freeman dollar drops that were missing in the latest beta have also been restored.

4.) Tree Variations
It’s now possible for a variety of tree types to co-exist in the same town — as opposed to one. Plant saplings can even be brought from other towns to mix things up a little bit!

5.) Terrain Colors
Terrain created by Void powers, the Eagle Corp Jackrammer, and the Comrade’s Jackrammer will now have a unique color associated to the town.

As you can see from this list, we have been very busy and are now incredibly excited to have everyone join in and play The Tomorrow Children.

And, of course, glory to all!