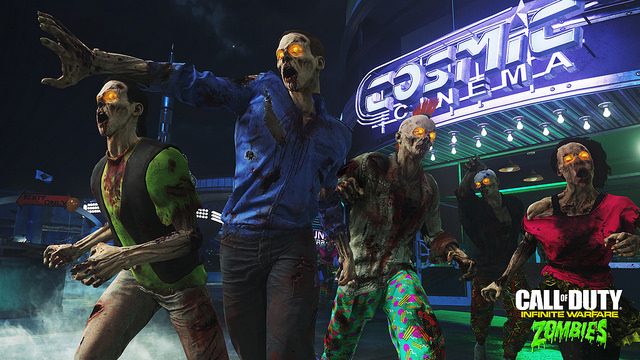 Treyarch built a loyal fan base since its first Zombies outing in 2008’s Call of Duty: World At War. And it’s easy to see why — the strategic teamwork, countless secrets, and hidden lore add up to an endlessly replayable co-op gem. It’s been a favorite of mine for years.

But now, Infinity Ward is taking the concept for a spin in this November’s Call of Duty: Infinite Warfare, and the results are sure to intrigue veteran Zombies fans.

Dubbed Zombies in Spaceland, this remix of the Zombies experience pits four 80s stereotypes against a day-glo undead horde, complete with vintage pop songs and new secrets galore. Justin and I got a chance to take it for a spin at Call of Duty XP — here’s what we noticed in our two-game session. I have a feeling we’re just scratching the surface!

Quick note: Some of the details we describe below may change, or be clarified, as the game nears completion. These were our live-in-the-field observations with a not-yet-final version of the game.

That’s it for now! Zombies in Spaceland is shaping up to be a refreshing take on the classic Zombies formula. I’m looking forward to playing more when this launches alongside Call of Duty: Infinite Warfare on PS4 November 4.

If you have questions, leave them in the comments below!