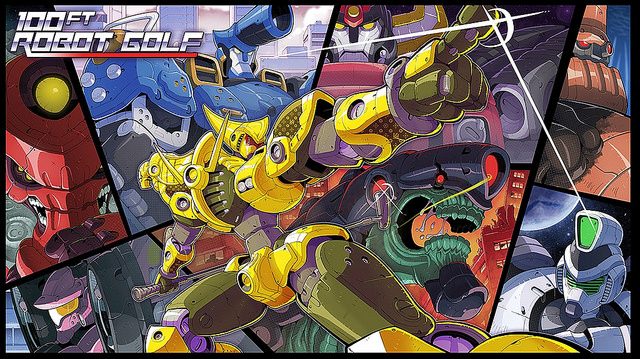 Hey there, PlayStation.Blog pals! Panzer and I have some exciting news: on October 10, you’ll be able to enjoy 100ft Robot Golf in your own home!

If you’re new to our wonderful large robot sports game, 100ft Robot Golf is literally what the title says: it’s a golf game where your golfer is a huge, 100ft robot that can destroy cities. You can play for par with four people on your couch, or destroy cities online with pals around the world. If you have PlayStation VR, you can even activate the PS VR mode to ride on top of these robot golfing behemoths while you play!

Over the past few months, we’ve been revealing the Robot Golf Tour Association pilot roster over on the 100ft Robot Golf Developer Blog. From Vahni, the “Beyonce of Robot Golf”, Suzume’s brilliant bio-mechanical research, Aveline and Uncle’s dual-pilot pompadour skating robot prowess, or even Ernie’s modest used vehicle salesman ways, we’ve been working hard to make sure that each robot and pilot combination plays and feels unique.

We do however have one very special robot boy we’d like to reveal here, just for our PlayStation.Blog pals.

Project C is a special project put together by Team NGBL, a secret underground organization specializing in unconventional golfing robots. Whereas most robots have one (or occasionally two pilots), Project C is actually made up of five separate robots, each piloted by an adorable puppy. These five dogs piloting five small dog robots form together to create a golfing megadog that may actually be taller than one hundred feet tall. Surely five dogs can beat one human at the robot king’s game that is 100ft Robot Golf?

To help with this dog-based robot golf domination, Project C has a secret weapon. At any time, you can press L1 to summon the Freesword, a mysteriously cheap light-powered broadsword that can cleave any building in half instantly. Is there a building far away that’ll block your shot to the green? Just tap L1 again to throw the sword at it!

You can find out more about Project C in 100ft Robot Golf’s campaign mode! It’s a fun and campy anime story that you can play through, filled with intrigue, love, suspense, and golfing action. You will also find out if these five robot golfing dogs are good dogs.

Don’t forget: 100ft Robot Golf arrives October 10 on PlayStation Store. Also, be sure to follow us at @100ftrobotgolf for all the latest robot golfing news in the leadup to launch. See you on the fairway!