Watch Dogs 2 is, among other things, about technology’s potential to unite communities and forge new connections among like-minded individuals. That’s reflected in protagonist Marcus Holloway’s constant collaboration with the Dedsec hacker collective, and their goal of continually recruiting new followers. It’s also reflected in the game’s seamless multiplayer, which invisibly merges your session with those of other players to create organic opportunities for co-op and PvP.

While it’s blended with the single-player experience, tackling the multiplayer isn’t necessary to play through the campaign — in fact, Watch Dogs 2 can be played entirely offline. How you access multiplayer is also highly customizable; not only can you turn it on or off entirely, you can decide which modes you’re open to individually. To help you choose, here’s a peek at what’s been revealed so far.

Let’s start with Bounty, a mode that doesn’t inspire a sense of cooperation so much as it does a sense of everyone else cooperating to bring you down. Offering a big rush of PvP adrenaline, Bounty puts a new wrinkle in Watch Dogs 2’s police heat system; cause enough chaos, and suddenly it won’t just be the cops breathing down your neck. Your police chase might spill over into a rival player’s game, giving them the opportunity to join in as a hunter. The longer you go without getting caught, the more hunters can join, with up to three on your tail at a time.

These hunters will be rewarded with new followers — the reward for accomplishing any activity in Watch Dogs 2 — and multiplayer points if they kill or incapacitate you, and they can see you on their maps as long as the cops have you in view. As the target, your task is to break your pursuers’ line of sight and escape, at which point you’ll get followers and your bounty will disappear. If you’re looking for a good challenge, you can net bigger rewards by taking down your hunters. The more hunters you eliminate, the bigger the payoff, but new players will join as others are taken down, so the real goal is still survival.

Like the other online modes, Bounty can be triggered either manually or organically. If you don’t want to wait for the cops to chase you, you can instead use the Contacts app on Marcus’ phone to broadcast a high wanted level for yourself, not only bringing down the law, but also any other players looking for a bounty. If you’ve got a co-op partner, they can join in as a defender, keeping up to two hunters at bay and making it easier for you to escape the pursuit. 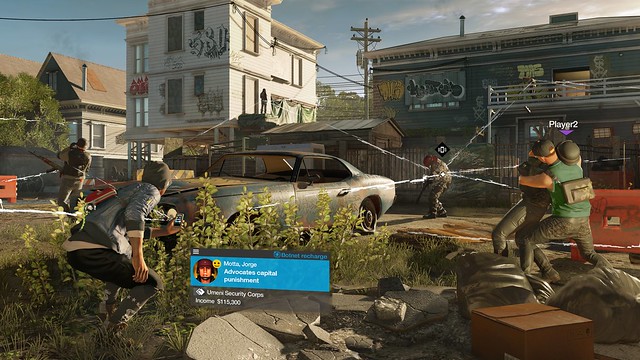 Another PvP mode, Hacking Invasion, returns from the first Watch Dogs with a few key tweaks. As before, Hacking Invasion is a furtive cat-and-mouse game where one player tries to stay hidden and alive long enough to successfully hack the player whose game they’re invading. In the name of balance, the download now begins as soon as the invader initiates the hack, eliminating a delay from the first game that could be used to find a convenient camping spot. Actually, camping in general is discouraged, as the other player’s drones give them an eye in the sky they can use to uncover and bomb your hiding spot.

Drones are an example of what makes PvP in Watch Dogs 2 so special: you’ve got a lot of new tools you can use creatively. For example, vehicles can now be hacked, meaning you can lure away pursuers with a remote-controlled decoy car, block hunters with a traffic pile-up, or — and this is especially fun — remotely jack a fleeing target’s intended ride just as they’re about to reach it and send salvation zooming away while cackling maniacally.

Those same opportunities for inventiveness and flexibility also apply to the replayable co-op missions, which let you and a partner tackle a variety of objectives – hacking computers, taking down moving targets, and so on – however you please, whether you want to go in side by side with guns blazing, or have one player sneak around while the other provides overwatch with a drone. It’s also possible to take on these missions by yourself, but you can expect an extremely steep challenge if you do. 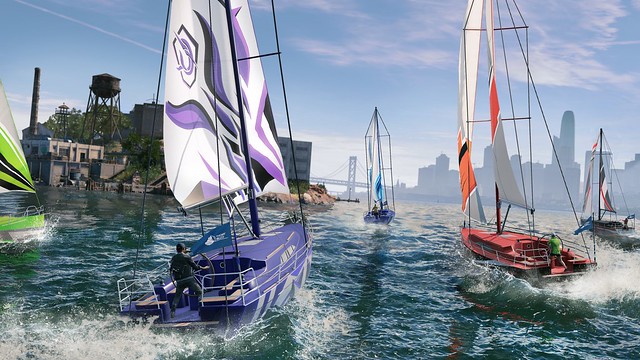 All multiplayer activities net you followers, and they’ll also feed into your multiplayer score, which can qualify you for low- and high-end cosmetic rewards at the end of each of the game’s post-launch seasons. Completing three or four online activities might qualify you for a low-end item — say, a shirt — while finishing enough to qualify for the high-end reward might net you a much cooler shirt.

How will you bend the environment to your will and outwit other hackers? You’ll be able to start experimenting when Watch Dogs 2 launches on November 15. Until then, we’ll see you at Gamescom!