A Sampling of Secrets from Riptide GP: Renegade, Out July 26 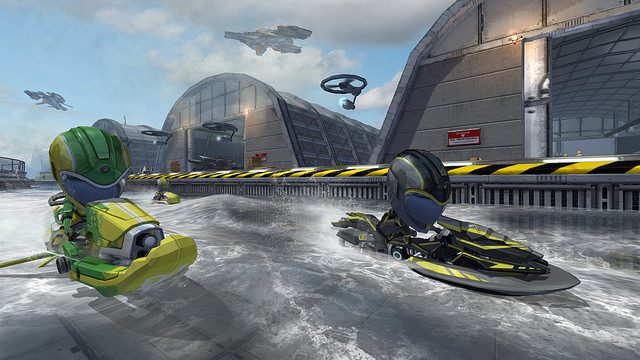 When we started development on Riptide GP: Renegade, our goal was to push the series more in the direction of the classic arcade racers we loved growing up: games like Hydro Thunder, Daytona USA, and the Rush series. From the beginning we knew this Riptide GP had to be more over the top, more action-packed, and… well, just generally more ridiculous.

One thing we love about those classics are all the secrets you can uncover. We packed a lot into Riptide GP: Renegade, and I want to share a few of them with you here so you can hit the ground running when the game comes out July 26 on PS4.

Keep Your Eyes Peeled for Shortcuts
Every level in Renegade has at least one or two shortcuts. Some are easy and shave a little time off your lap, others are hard but can jump you to the front of the pack when you’re willing to take a risk. Explore every level to find them all, and watch other players online for clues.

One of the harder to find shortcuts is in Fountain Park, just after the fork with the big bonsai tree. Instead of following the water, drive up the wall under the bridge, and you’ll break through the fence onto the upper fountain level.

Collect All the Easter Eggs
In Renegade there is an easter egg hidden on every single level — a literal Easter Egg. Find and collect all of them, and you’ll unlock the coveted “Chicken Head” player decal to show off to your friends. (Tip: You can track your egg collection on the Stats screen.)

References to Our Other Games
Scattered throughout Renegade are numerous references to previous Vector Unit games. Fans will recognize locations, characters, and images from earlier Riptide GP games, the Beach Buggy Blitz series, and even our first game, Hydro Thunder Hurricane.

Inside Jokes in the Story
This is the first game in the Riptide GP series with a story mode. Not only is it an epic tale of betrayal and revenge, it also has a bunch of references to games, movies, and game development. For example, the robot character 0xDEADBEEF is an old programming joke — it’s “hexspeak” for uninitialized memory. The robot chose its name as a gag reference to its own hacked AI code.

Big Head Mode
Here’s a recipe for good times: a few friends, Riptide GP: Renegade split screen multiplayer, and a secret (yet strangely familiar) code to unlock Big Head mode. On the title screen, enter UUDDLRLR on the Left Stick or D-Pad and then hit X. You’ll get a confirmation sound and jump into the main menu. Let the hilarity ensue!

These are just a few of the secrets hidden in Riptide GP: Renegade. Please let us know what you think when the game comes out. I hope you have as much fun exploring the game as we had making it. See you online!