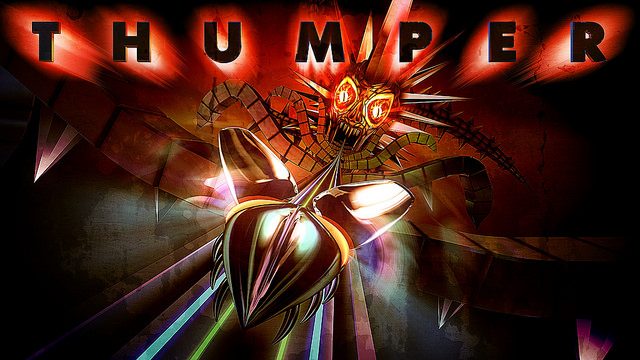 This is Marc from Drool. Back in 2009, Brian Gibson and I teamed up to create Thumper, our rhythm violence game. Today, we’re excited to finally announce Thumper is launching alongside PlayStation VR on October 13.

Thumper contains nine epic levels playable in both ultra-glossy 2D and fully immersive VR. Over the past few months, we’ve made many enhancements to take full advantage of PS VR. We’ve fine-tuned movement speed, the scale of the game world, and our visual effects to create an overwhelming sense of speed and monumental dread. It’s hard to describe if you’ve never been a space beetle on a screaming hell ride before. But no matter which way you play, we think you’ll feel the violence!

Of course, audio is also an essential part of Thumper. Brian composed the music using a unique “gameplay first” technique. Most rhythm games take pre-composed songs and fit gameplay around them. For Thumper, we first developed the mechanics and levels and Brian used them to create an integrated sound experience that maximizes impact. You don’t play the music in Thumper, you survive it.

We’ve always wanted to release Thumper and its soundtrack in a special way. So we couldn’t be more psyched to team up with the fine folks from iam8bit to create a limited edition collector’s package. You may have seen their Journey and Hotline Miami 2 vinyl right here on PlayStation.Blog. Our Thumper CE includes a game code and vinyl soundtrack with cover artwork designed by Robert Beatty. Robert’s music and art were a key inspiration for Thumper and we can’t wait to hold this beautifully designed package in our hands! It will include a psychedelic picture disc and some extra special features we’ll announce soon.

Check out the iam8bit store for more details and to pre-order the Collector’s Edition.

Thumper will be available at PlayStation Store as a digital download for $19.99 on October 13.