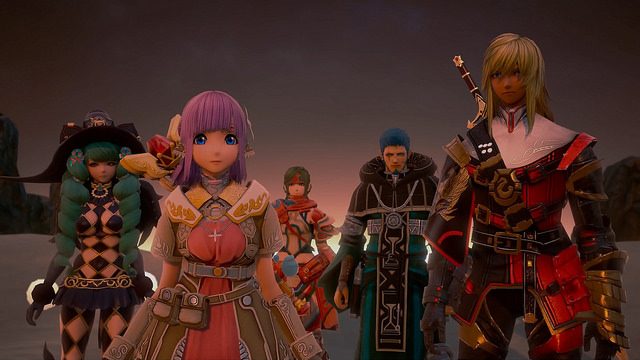 Star Ocean: Integrity and Faithlessness is out today in North America, boasting a real time action battle system — a first of its kind for the series. It’s a JRPG with an immersive story and a unique sci-fi twist.

For those who have never heard of this title, the Star Ocean franchise has a rich history spanning 20 years. For long time fans, yes, it has been awhile, and we’re so excited to bring it back! Star Ocean: Last Hope the previous Star Ocean game released in 2010 and prior to that, Star Ocean: Till the End of Time launches back in 2004.

For those who have not had a chance to see the launch trailer, check it out here!

If you’re new to the series, don’t worry that the game takes place on Spacedate 537 or that you’ve never played Star Ocean before. Although all Star Ocean games are part of the Star Ocean universe, new players will not need prior knowledge as the latest installment has its own unique story with all new characters, environments, and familiar elements for the veteran fans!

What is the charm of Star Ocean: Integrity and Faithlessness? First off, the gameplay and art creation of the all-star development team is exciting — including Director Shuichi Kobayashi, Tri-Ace producer Hiroshi Ogawa, and character designer Akira Yasuda (akiman) known in the gaming and manga community. Being able to have 7 characters in battle creates a thrill as you will be able to experience fast-paced action with an option to switch between 6 of the players.

The Battle Role System allows players to customize how the various characters will attack, heal, cast magic, and more. Battle tactics will enhance as you level up the roles, creating a very fulfilling experience.

Another fun feature in the game is its dynamic Party Skills system that includes fun things like gathering and crafting elements. Note, there are plenty of rare skills that you can unlock like the Emoter, lockpicking, mining, and more!

Next up, the incredibly epic music from the famed composer Motoi Sakuraba! All of this comes together with the talented voice-over cast! With the variety of the character roster, it was very essential that the VO actors breathe life into each of the party members.

In closing, thank you to the outpour of support and love on all of the Star Ocean social channels! To celebrate the launch in North America, the development team is stopping by Anime Expo at the Los Angeles Convention center from July 1 to July 3. We’re having an “Aligning the Stars” panel with the VO cast and developers, Akiman signings, cosplay gatherings, and a launch party, so if you’re in the area definitely stop by to enjoy the festivities!

We can’t wait till you get your hands on the game to traverse the stars in Star Ocean: Integrity and Faithlessness. Please leave your comments below!