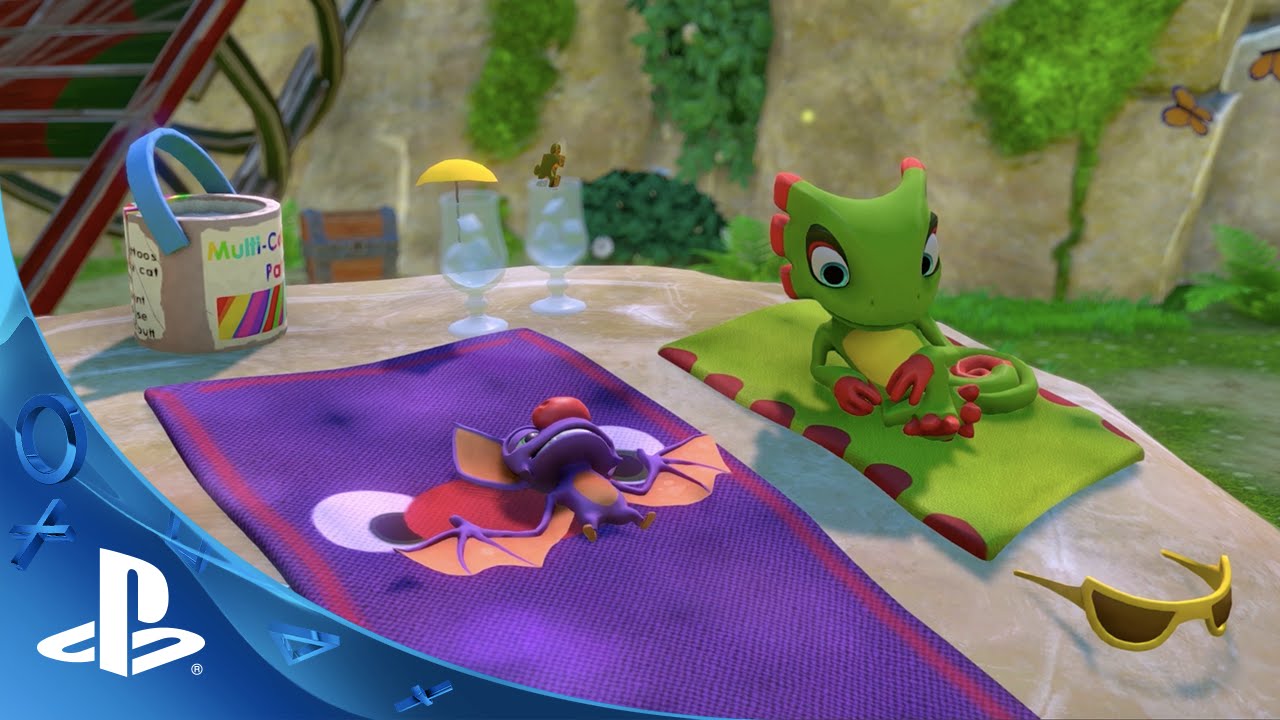 Hello, ladies and gentlemen of PlayStation. We’re Playtonic Games and we’re delighted to introduce the debut trailer for our game Yooka-Laylee, a new open-world platformer from the key creative talent behind genre classics Banjo-Kazooie and Donkey Kong Country.

Yooka-Laylee is a love letter to classic platformer-adventure games, from a team of veterans responsible for some of the genre’s most iconic games. You can expect huge, beautiful worlds to explore, quirky characters to meet (and beat) and a vault-load of shiny collectibles to horde along the way. Oh, and a whole load of word puns.

Our heroes, Yooka (the green one) and Laylee (the wisecracking bat with the big nose) were conceptualized “from the ground up,” to quote our favorite marketing phrase, for stellar platforming gameplay. Using their arsenal of special moves such as Yooka’s tongue grapple and Laylee’s sonar shot, our heroes will tackle a huge variety of puzzles and platforming challenges in their search for Pagies, the golden bounty used to unlock — and expand — new worlds, each jammed to the gills with oddball characters and hulking bosses.

The magical Pagies will assist the buddy-duo in their ultimate mission to thwart corporate creep Capital B and his devious scheme to absorb all of the world’s books… and convert them into pure profit.

Using the hundreds of collectible Quills discovered during their travels, the buddy-duo will purchase and unlock moves from the serpent salesman Trowzer, which they can choose to do in virtually any order that the player decides. This is just one way which Yooka-Laylee empowers player choice, in addition to the ability to expand and make larger the worlds you’ve already explored and the unique Tonic gameplay modifiers which can be used to customise your play style.

During their travels Yooka and Laylee will encounter a huge cast of memorable characters, and our legendary art and audio teams have designed each critter to endure in future adventures as part of Playtonic Universe. Expect all manner of grunts, squeaks and squawks.

Today we’ve brought you just a glimpse of what we have planned for Yooka-Laylee, but there’s plenty more down our collective sleeves including unique boss fights, mine cart challenges, retro-tastic Arcade games, quiz shows, co-op and 8 unique multiplayer games!

Yooka-Laylee will release on PS4 in Q1 2017. We look forward to showing you much more of the lizard and bat’s adventure in the run up to release.