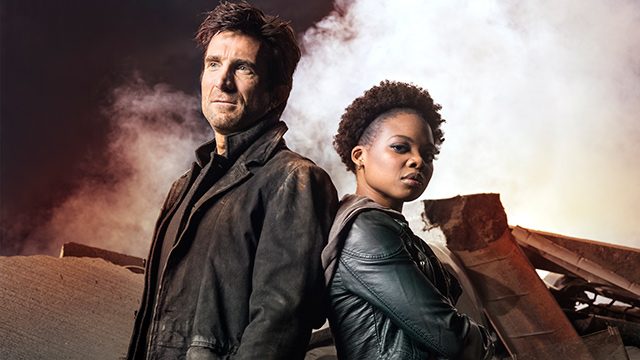 So here we are, just a few weeks away from the debut of season two. And many of you have been asking: how are you feeling about everything? What have you learned from making the first season of Powers?

1.) Nothing Beats a Second Wind

The only thing better than scoring a TV show in the first place is getting the privilege of a second season. No joke! This might sound silly, but as hard as it is to create and launch a show, it’s actually a far bigger win to get a big enough response to warrant the folks in charge saying, “Okay, let’s make more.” Thank you, everyone, for getting behind us.

So what makes Powers special, exactly, when it’s expressed as a TV series? Powers the comic book is a unique case. It’s not a superhero comic, but a police comic that has superheroes in it — that’s a huge difference. And it’s been our unique perspective and style that makes us stand out in a crowded market full of really interesting comics of all kinds.

TV has experienced a similar genre shift over the last decade. Network, cable, and streaming services are becoming packed with as much cool superhero and genre fare as the local comic book store shelves.

As a show, Powers stands out because it’s the first original program available on PlayStation Network. But it’s also unique in its sensibilities and its style, and how it deconstructs the genres that we love so much.

But more than anything else, we get to do things that you’d never see on other shows based on popular licensed characters. For example: part of episode two takes place at a powers-themed sex club. And you can look forward to some spectacular exploding heads throughout the season.

Powers is a show for adults, by adults. And in season two we celebrate that fact. Big time.

In the world of TV production, you quickly learn that writers produce their best work when they know the actors. Like, really know them, inside and out. And because we hired a ton of amazing actors while gearing up for the first season, it’s going to change some of the dynamics you noticed in the first season.

Attentive writers will notice if some of the actors gradually become close friends and might use that to inspire their on-screen dynamics. For example, the amazing Olesya Rulin (Calista) and Logan Browning (Zora) are totally buds in real life. They are fun to be around. They are fun to watch together. So although we ended last season with the two characters at odds, we certainly went into this season seeing if we could find a way to get them to be friends.

I mentioned in the writer’s room how in those first days of summer camp, the person who was the meanest to you sometimes ends up being your best friend. I’m dying to see what Powers fans think as they watch the characters grow and evolve towards each other in the new season.

Perhaps most important of all: putting more focus on the inspiration and talent of Powers co-creator Michael Avon Oeming. He is such a powerful cartoonist and storyteller. His style is so unique — it not only made our book stand out on newsstands, but it kept fans reading.

When gearing up for season two, it was very clear that the TV show needed to find an equally powerful visual statement, one that channeled Oeming’s sensibilities but in its own unique way. Thanks to our costume designer, cinematographer, stunt coordinator, and production designer, we accomplished that goal this season.

Our stunt coordinator, Mike Massa, worked very hard to do as many practical stunts on camera as possible so we could really feel the fights and chases. Fans of the comic know that Oeming takes every opportunity to bring out the gore and guts — well, he has met his match, because our visual effects makeup artist, Andre Freitas, is as disturbed as he is. Wait until you see what this mad genius has cooked up on our show.

We had a lot of fun blending the visual style of the show and the book back and forth. Below, take a look at this imagery my good friend Mr. Oeming whipped up for the show.

Thanks for reading! As we prepare for our big May 31 debut, I’ll have plenty more to report in upcoming blog posts. I’m interested in shining a spotlight on some of the talented artists whose work left such an amazing stamp on the second season. It’s something I am very excited to share with you.

I’ll be back here very soon to do just that. But, in the meantime, what else would you like to know? Let me know in the comments below!

Finally, it’s worth reminding you that Powers Season 2 will debut exclusively on PlayStation Store on May 31 — free with your PlayStation Plus membership. You can access the latest episodes, trailers, character bios, and more at playstation.com/powers.