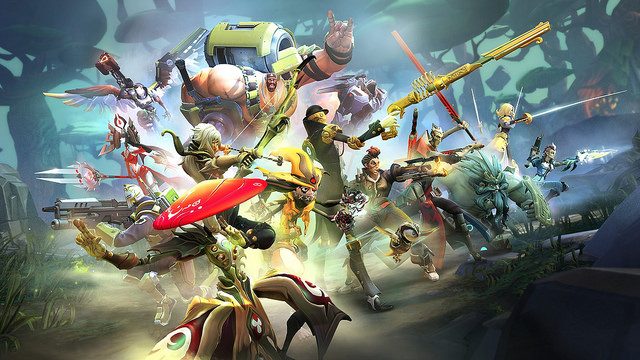 Battleborn has lots of character. OK, if we’re being technical – it has 25 of them. And every single one plays differently from the others. Do you want to pilot a murderous mech? Fly like an eagle and plop down rockets on targets below? Maybe you want to be a sentient mushroom? Perhaps a vampire space samurai? Or a telekinetic swashbuckler? No matter your style, you got this. So, while we don’t have enough room to talk about every single playable hero in Battleborn here, let’s at least cover 12 of them.

Toby may look like a loveable little penguin, but don’t call him “cute.” Ever. Turned away from Peacekeeper militia service because he looked so huggable, this engineering genius has a gigantic chip on his adorable little shoulder. Cheese Toby off and he will jump into his battle mech suit and murder the hell out of you with his rail gun and Arc Mines (and probably apologize while doing it). Fire up his defensive shields and Toby is a great teammate to help you hold the line.

He summons black holes on the battlefield, he launches energy mortars and supercharges your shields – and he does all this without even getting out of his chair! The cantankerous Kleese ran Minion Robotics (for a few minutes) only to be replaced by an insane AI. Now, floating around on his custom-built Tactical Battle Chair, Kleese possesses the most deadly lounge furniture in the universe. He’s perfect for protecting your team and laying down some area-affecting heavy-fire in the process.

Who needs a plan when you have the might of El Dragón by your side? This former champ of the professional wrestling circuit sprints into the fight and presses the attack – with style! El Dragón is an up-close fighter with a variety of attacks that are just as deadly out of the ring. And when you hear his “El Dragóóóóóóóón” battle cry, run for high ground! Odds are, he’s raised his two massive robotic arms and is currently barreling your way, ready to clothesline your face.

The only thing worse than dealing with a snotty emo know-it-all teen that only cares about herself: One that has a hulking omnidimensional monster grafted to her torso. The resulting mass is a combination of Shayne’s speed and razor-edged boomerang with Aurox’s ridiculous destructive power up close in melee. Even worse, Aurox is able to cloak Shayne and come crashing down on unsuspecting victims. Actually, I take that back. Knowing that you’re getting taunted by some punk after you get laid out – that makes it way worse.

It’s a toss-up about what’s more offensive: Benedict’s rocket arsenal and combat prowess…or his ego. The high-flying hawk-man sure thinks highly of himself – and before you get a chance to question it, he will drop a payload of rockets on your head. That’s saying nothing of the remote-controlled missile you can fire once you level up enough. If his firepower isn’t enough to give you pause, a couple flaps from this Aviant’s wings and he can fly out of harm’s way or soar above it and scout the battlefield.

ISIC was the lead manufacturing Magnus A.I. at Minion Robotics, where he drove record profits and revolutionized production pipelines. After his mind fell to pieces, he joined a pro-wrestling circuit, tore a dude’s arms off (El Dragón – that’s a whole other story), and decided minutes later that the physical universe is nothing more than a simulation and must be destroyed. So, y’know, a Magnus of many interests. This walking, talking, psychotic tank is great for holding ground with his shields and protective wards. Then again, ISIC’s Charge Cannon and dash attacks are also great at pushing forward.

Unhinged, unpredictable, and feared even by members of her own team, Orendi the chaos witch has incredible speed and the ability to inflict tons of damage in a hurry. She’ll unleash bursts of chaotic energy and raise entire towers of destructive force. And if she happens to hit the Varelsi in the process, that’s cool, too. Want to watch the universe burn with her? Of course you do.

Once a proud Eldrid warrior, Galilea is being torn apart by the same dark energies that are keeping her alive. Heavily armored – and heavily armed with her Greatsword and Greatshield – she is a fearsome fighter that can quickly close the gap and decimate foes up close. She can disappear into the void and slip back out just as quickly to drain your lifeforce and chop you to bite-sized pieces at the same time.

There’s a fungus among the Battleborn! Miko, the sentient mushroom, is the last remaining bud of a planet-spanning fungal colony. This combat botanist is equally capable of fending off foes on the battlefield and keeping your team alive. So, pick your poison. Literally. You can become a walking biohazard and damage foes while flinging endless kunai blades or focus on healing spores that can bring your team back from the brink.

Rendain’s former Spymaster needs to stop the Jennerit Imperium from making a huge mistake: helping the Varelsi destroy the universe. To do that, she’s ready to join the Battleborn and use her assassin-honed strategic stealth to take down her former master. One of her favorite attacks is to drop a hologram to distract you as she cloaks to sneak up behind and stab you repeatedly with her War Fans. If you don’t like fair fights, pick Deande.

That red-bladed tornado on the battlefield? Oh, that’s just Verod Rath. He’s brutal, efficient and deeply devoted to the art of combat. Once an elite guard – a Keeper of the Blade – to the Jennerit Empire, he’s since devoted his three energy blades to slicing up the Varelsi at every opportunity. Unsurprisingly, he’s a brutal up-close melee fighter with his two laser katanas. He also assures us he’s not a vampire. He gets that a lot.

Class. Sophistication. Insanity. Everything that you’d hope for in a high-society sociopath is yours on the battlefield! A courteous nod to Marquis as he unloads his sniper rifle cane – Bindlebane – on the enemies. A tip of the hat as he launches his clockwork owl to make short work of distant peasants. And don’t forget – haste makes waste! With his ability to lay down temporal disruption zones, Marquis can slow down incoming forces.

Something to keep in mind

That’s less than half of the starting lineup! And we’ve already announced that we are starting work on five more playable Battleborn badasses that will be free when we’re done creating them!

Now it’s your turn. With Battleborn out today, who are you gonna pick to stop the Varelsi and save the universe?