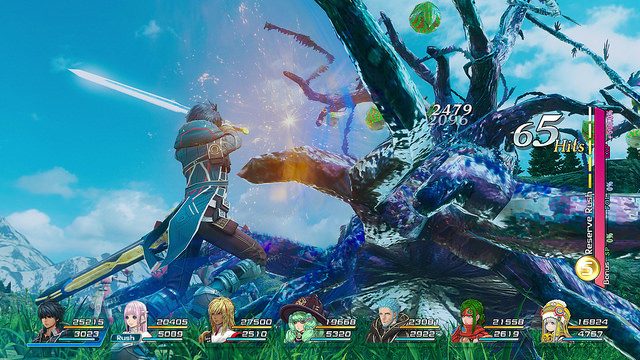 The greatest sci-fi JRPG returns! The next installment in the Star Ocean franchise, Star Ocean: Integrity and Faithlessness, comes to PS4 on June 28. Yes, it’s a mere three months away!

This year actually marks the 20th anniversary since the release of the very first Star Ocean, so it’s a very special time for us at the office. We’re celebrating our fifth dive into a universe we all know and love, and we can’t wait for you to experience it with us.

New to Star Ocean, you say? Well here’s a couple of things you should know.

All the titles in the series share a rich history and universe, but you should know that you don’t have to play the previous games to enjoy the story of this one. It’s not like watching the third movie in a trilogy without watching the first two — you won’t get lost.

Apart from the story, the battle system is really a driving factor in why players return to the series. Star Ocean: Integrity and Faithlessness will actually boast the ability to have up to seven ally characters on screen and battling simultaneously. (Clears throat) Seven!

To give you some perspective on that, imagine seven characters from your favorite fighting game banding together using their flashy abilities all on one screen simultaneously and obliterating enemies. Excited much?

Well, as you know it’s been five years since the launch of the last Star Ocean. So there’s been an itch to bring the franchise back to the top of the JRPG echelon. This was producer Shuichi Kobayashi’s mission from the start, and that passion has been contagious between our offices in Japan, Europe, and here in the United States.

He asked me to deliver this special message to Western fans:

“It’s been a while since our previous title, but the time has come for us to share the ‘story of the sea of stars’ with everyone once again. I am personally really happy to be able to take part in the revival of the series that I truly love. I believe that there is significance in announcing this title at a time when there aren’t many JRPG consumer titles being released compared to before.

“The series’ traditional exhilarating action battle has evolved with a party of a maximum of 7 characters, with easier-to-create combos. We have also prepared many elements that let you play for hours on end, so I hope you give it a try.

“I hope for your continued support so that the story of the sea of stars can continue even more.”

To give you a bit of background on the story. Star Ocean: Integrity and Faithlessness revolves around a blue-haired swordsman named Fidel. Look at that hair. Can we all please live in a galaxy where our hair looks that good all the time?

Anyways, Fidel and his crew, which includes the pink-haired healer named Miki, embark on an adventure that will transcend space to protect a mysterious girl, Relia, from dark forces.

I know what you’re thinking, and the answer is yes! There is a Square Enix e-Store exclusive collector’s edition and it’s made up of some pretty sweet items. We’re only selling 7,500 of these so you’ll definitely want to grab one if you’re into having awesome, limited things that people will be jealous of.

If you miss out on the collector’s edition, you can still pre-order to receive the Day One edition which will have the same DLC items, as well as two BGM themes from the Valkyrie Profile series you can play during battle.

Personally, I’m very proud to say that Star Ocean: Integrity and Faithlessness is my first title here working at Square Enix, and I’ve been blown away by how many fans of the series and JRPG fans in general are showing their support for the game.

I sincerely hope you’re all as excited as I am for launch, but until then, be sure to keep up to date with all of the new Star Ocean content through our “Star Log” live streams, which air on the Square Enix Twitch and YouTube channels.

The TLDR message of all this: Star Ocean is back.