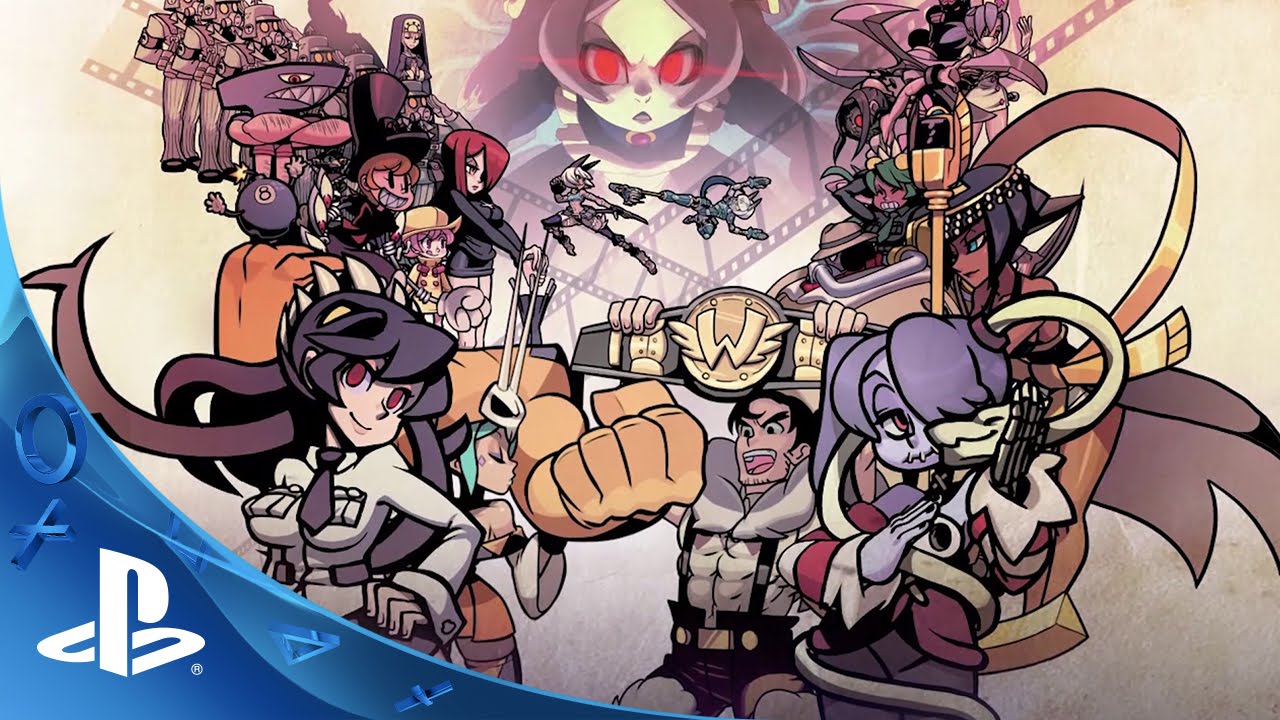 Two years ago on April Fool’s, we revealed Fukua, the joke character who actually turned out not to be a joke at all.

Today we have another equally real announcement: Skullgirls 2nd Encore is finally coming to the PS Vita on April 5!

We previously expected this to launch last summer, for which we apologize — Skullgirls features a huge amount of hand-drawn animation (averaging around 1,500 frames per character), so balancing performance and image quality on the handheld proved trickier than expected. And just when we thought we were close, we had to change gears to focus on deadlines for Arc System Works’ release in Japan.

Anyway, we’ve put a lot of effort into the PS Vita version of Skullgirls 2nd Encore, and we hope you’ll find the wait was worth it!

In addition to making sure the basic controls and gameplay are responsive, we’ve also added front-screen macros. Tapping these sectors on the front screen will activate a customizable macro, letting you call an assist, switch characters, or whatever else you can think of.

And, as we noted above, Skullgirls 2nd Encore on PS Vita is one of a handful of games to support local multiplayer on PSTV. Just sync a second DualShock 3 or 4 controller and you’ll be able to play with a friend next to you, just like the PS3 or PS4 versions!

On top of that, Skullgirls 2nd Encore is cross buy — buying the PS Vita version will get you the PS4 release, and vice versa. If you already own the PS4 version, you’re already taken care of — just log into the PS Vita store after Tuesday’s update and download away! Couldn’t be easier

By popular demand, we’ll also be releasing the PS4 theme for sale soon!

The theme features two beautiful new pieces of art, icons featuring Skullgirls characters, and a soothing instrumental arrangement of Michiru Yamane’s “In a Moment’s Time.” We think it’s one of the best PS4 Themes out there, and we’re confident you’ll agree.

And while we’re talking about Themes… keep an eye out for a free Dynamic Theme from our new project, Indivisible, coming soon!

In addition to the Theme, we’ve begun releasing the Skullgirls avatars on PS4 store. There are 39 in all, which we’ll be trickling out over the next couple of weeks.

If you’ve already purchased them on PS3, there’s no particular reason to upgrade, but now they’ll be more accessible and easier to find if you haven’t.

With the PS Vita version complete, we’ve moved onto completing the final Skullgirls patch, which will bring multiplayer lobbies to the game.

We had to wait until all the PlayStation versions were complete to fully focus on this, because all must be released simultaneously so as not to fragment the online community.

And once the patch is all ready to go, we then need to coordinate and release nine patches simultaneously in three regions from three different publishers so as not to break everything for everyone worldwide. If it wasn’t obvious, this is a pretty big lift for a small independent developer like Lab Zero.

Skullgirls’ multiplayer lobbies allow eight players to gather and fight or spectate, but also have a feature we like to call “All Play.”

In most fighting game lobbies, eight players will queue up, and six players will wait while the first two players fight. When those two are done, the next two will fight, and so on.

With All Play, eight players enter the lobby, and all eight can be paired up to fight at once. And as they complete their matches, they’ll be paired up again as soon as they’re out.

This means less time waiting your turn and more time playing, something we think the genre has needed for quite some time.

The first pass on the PS4 and PS Vita versions of the lobby code are nearing completion, so we’ll begin preliminary testing and bug-fixing shortly. While that goes on, we’ll be working on the PS3 lobby patch, as well.

And that’s all I’ve got for you! We’re excited to finally get Skullgirls on your PS Vita and in your hands!