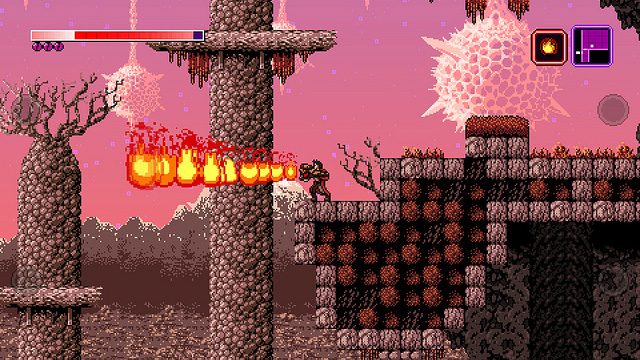 I’ve been looking forward to making this announcement for a long time. When I announced Axiom Verge for PlayStation 4, I also said that not only was it coming to PS Vita as well, but that it would be Cross Buy. It took far longer than I expected to make good on that commitment, but that day is finally near.

I’d like to give a little bit of context on what took so long. When I started development of Axiom Verge, I was using a development framework called XNA. Support for XNA was abandoned, so the community created an open source version of XNA called MonoGame. Sony told me they were working to get MonoGame supported on both PlayStation 4 and PS Vita. I knew that Axiom Verge would be great on a handheld, so I jumped at the opportunity.

Tom Spilman from Sickhead Games was in charge of the porting process. Porting an engine to a new platform is an incredibly complicated task, yet he was able to pull it off easily for PlayStation 4. After the PlayStation 4 version was done, however, porting it to Vita turned out to be a lot more challenging. Optimizing an engine is slow and painstaking work. As the months ticked by, Tom was feeling a great deal of pressure to get MonoGame working.

One analogy that I like to use when describing getting Axiom Verge working on PS Vita is that of a lightbulb. For months, Tom Spilman was putting in all of the wiring, but until it was fully connected, the light bulb just couldn’t turn on. And finally, about a month ago, Tom Spilman was able to make the final connection. The build went from not running at all on Vita to running almost perfectly. There were a few bugs here and there that needed to be tweaked, but most of that was fairly minor and easily handled.

We discussed with Sony, and we have settled on a launch date of April 19! And as promised since the beginning, it will be Cross Buy, so if you already own the PlayStation 4 version you’ll get the PS Vita version for free.

Oh, and one more thing – just to thank everyone for their support and patience, both versions will be 10% off for the first week after the PS Vita version launches.

I remember exactly where I was and what I was doing one year ago today. I was sitting in my living room, continually logging into the PlayStation Store to see if it had refreshed, backing back out, and repeating. The reviews for Axiom Verge had come out the day before, and they surpassed all of my hopes. USgamer’s Jeremy Parish, whose writing I had followed for over a decade, called it the best game he’d played in years. Jeff Gerstmann, the famously tough critic from Giant Bomb, gave it his first 5/5 score in about 2 years. In all, I think it got about 25 separate review scores of 9/10 or better! And when I saw the Axiom Verge box art I had drawn up on my TV screen, I knew it was all real. (Well, to the extent there is such a thing as objective reality, but I suppose I digress.)

My life has changed quite a bit from that day, but not necessarily in the way that people might expect. The period leading up to and following Axiom Verge’s release was a challenge, starting with the loss of my longtime canine companion Max just days before launch. I had to sell my car to pay for his treatment, and losing him right before launch put a dark cloud over everything. My son Alastair was born after the game launched, but he was afflicted with a severe case of jaundice that may leave him permanently disabled.

The silver lining here is that, thanks to the success of Axiom Verge and the support of its fans, I’ll be able to be there for my family. I wrote more about Max and Alastair over at AxiomVerge.com, if you’d like to read more.

I know many people have been waiting a long time for the PS Vita version of Axiom Verge. Thank you so much for your patience, understanding, and support. It has meant the world to me and my family.