Furi on PS4: A Gauntlet of Brutal Boss Battles 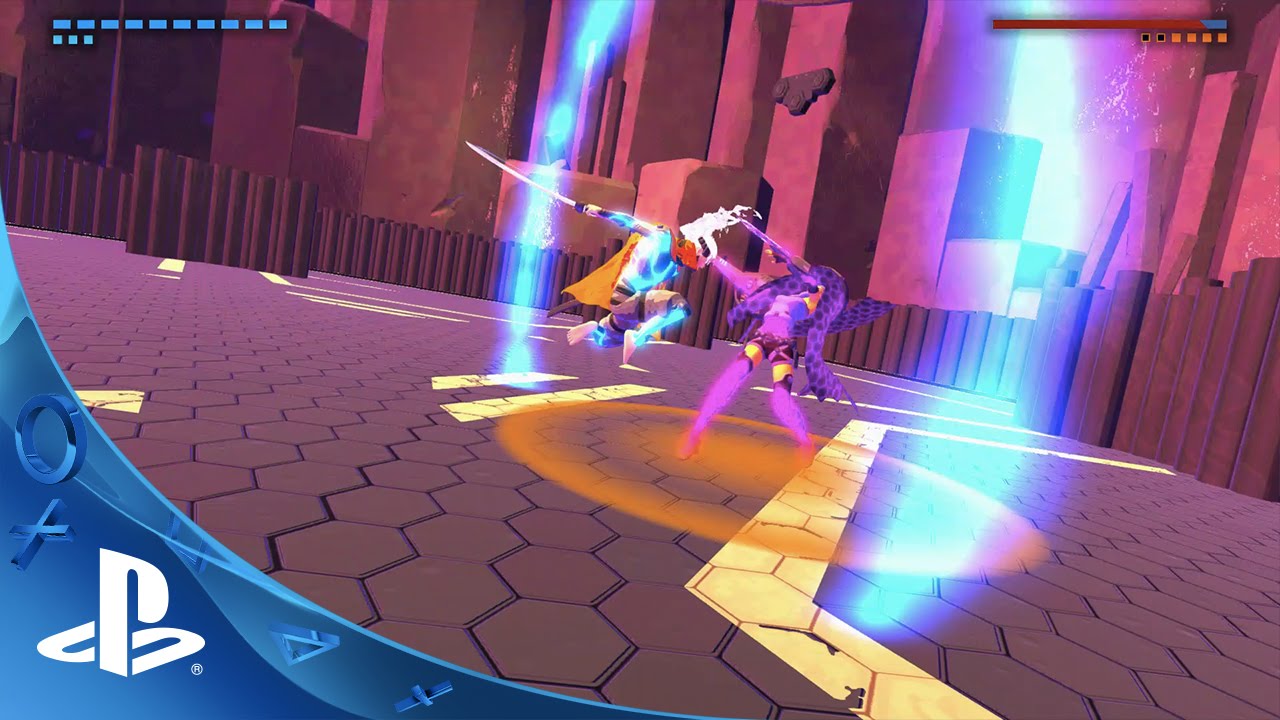 There is a feeling that I remember from when I was a kid playing video games: the huge, intense satisfaction when I finally beat a level or a boss I had been struggling with for a while. The feeling of learning how to overcome a challenge, with my brain and my thumbs. The combination of understanding and execution felt like a reward in itself.

I remember it from games like Super Punch Out, bosses from Metal Gear Solid, combat in God Hand. There are many games that gave me that feeling, but recently I’ve felt that games try too hard to be “user friendly.” Adaptive difficulty, dynamic checkpoints, in-game tips… Everything is explained and balanced to make sure nobody drops out.

With Furi, we want to give the player an extreme satisfaction when he or she beats a boss. That means he or she will have to sweat a little for it.

Furi is heavily inspired by the Japanese way of making games. It’s not trying to be realistic in its style or animations. It’s fast-paced and requires a lot of timing, reflex, and judgment. When you press a button, the character reacts immediately. It’s part of what makes it “fair.” Too often in modern games, we press a button and then, in order to make the game look realistic, the character will start an animation that “looks good” but “feels heavy,” and is unresponsive, even laggy. Responsive controls feel good and are a must-have in a combat game.

The gameplay in Furi is the essence of the catchphrase “easy to learn, hard to master.” There are very few buttons to press or abilities to remember. You can slash with your sword, shoot with your gun, dodge, and parry. That’s about it.

You can charge the slash attack, the gunshot, and the dodge. It’ll result in a more powerful slash that stuns the opponent, a more powerful gunshot that knocks him or her down, and a longer dodge. But once you’ve got that, you can play Furi. It’s like a guitar: it has six strings, but you need practice to play it correctly. And there’s no limit to how much you can improve. It’s simple and deep.

The challenges are mostly based on a simple formula: be warned, react, punish.

Dodge a laser. Parry a sword attack. Wait for the weakness in your opponent’s posture, and bam, punish. The real depth in the gameplay comes from the differences between the bosses. It’s not about learning tons of combos to beat the next boss, it’s about how you play a few moves differently to beat a different opponent.

Some bosses, or “guardians,” will focus more on shooting. Others will challenge mostly your sword fighting. Some opponents are deadly and will knock you down in two or three hits. Some fights will require a lot of focus over a long time. A fight can last 10 minutes or 90 minutes depending on how you play. And of course, each guardian in the game has one or two special tricks, weapons, or abilities that make him or her unique.

In our latest trailer we’re showing one of the fiercest guardians. She is a tactician, a hunter, a playful mercenary who doesn’t leave anything to chance. She has planned her fight and has weapons to help her win: drones, a laser sniper rifle, great camouflage, and she can even control every bit of the arena she fights in, raising cover and blocking paths.

At first, she’ll hunt you, hidden in her maze, shooting at you while you are distracted by her cyber-bees. You will have to find her, and attack her before she relocates. You’ll get to face her for a while if you can do that, but that’s still playing into her hand.

In order to take her out of her comfort zone, you’ll have to follow her into her nest, in the center of the maze, and knock her out once or twice. Once this is done, she’ll get pissed off and she’ll keep sniping at you while you have to dodge waves of bullets coming fast. Eventually, the final challenge is to fight her hand to hand… while she is invisible! This requires sharp reflexes and focus.

I recommend taking a break after beating her. Because I know the guardian that comes after!

We’re interested in hearing your feedback. Let us know what you think and if you have questions.