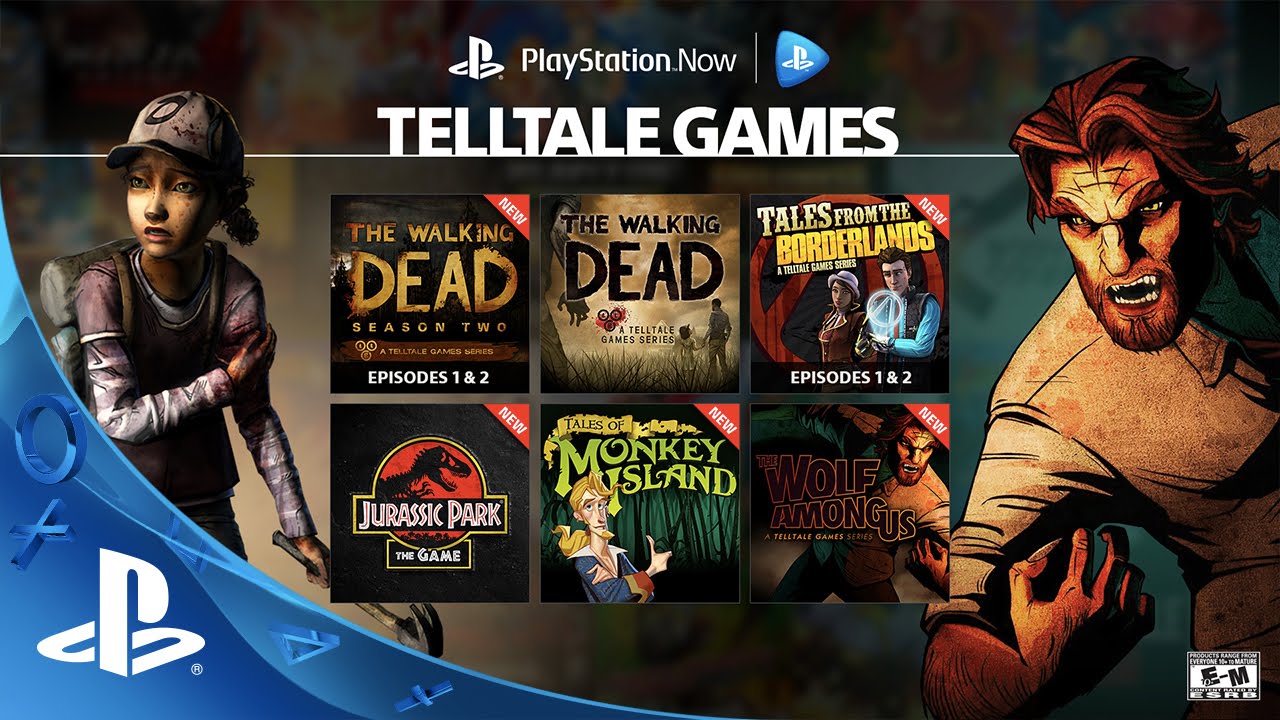 Telltale Games — known for its riveting storytelling, evocative graphics, and intuitive gameplay — will be adding 10 games to the ever-expanding PlayStation Now subscription catalog this month.

We’ll understand if you choose to run (not walk) to your nearest PlayStation Now-enabled device to start playing instant classics such as The Walking Dead, The Wolf Among Us, Jurassic Park: The Game, Tales of Monkey Island, or Tales from the Borderlands.

Once you finish playing Tales from the Borderlands, jump right into the games that first introduced Gearbox’s beautifully twisted world of Pandora, the Atlas Corporation, and of course, Handsome Jack, with Borderlands 1 and 2.

Without further ado, see below for each of the Telltale Games available with your PlayStation Now subscription.

The Walking Dead: The Complete First Season
Play as Lee Everett, a convicted criminal who has been given a second chance at life in a world devastated by the undead. With corpses returning to life and survivors stopping at nothing to maintain their own safety, protecting an orphaned girl named Clementine may offer him redemption in a world gone to hell.

The Walking Dead: Season Two — Episodes 1 & 2 (New)
Season Two continues the story of Clementine, a young girl orphaned by the undead apocalypse. Left to fend for herself, she has been forced to learn how to survive in a world gone mad. Many months have passed since the events seen in Season One of The Walking Dead, and Clementine is searching for safety. But what can an ordinary child do to stay alive when the living can be just as bad — and sometimes worse — than the dead?

Tales from the Borderlands — Episodes 1 & 2 (New)
Set on the unforgiving world of Pandora after the events seen in Borderlands 2, this is a story full of Borderlands trademark humor, following two adventurers on their quest for greatness. You’ll play as Rhys, a Hyperion suit with dreams of being the next Handsome Jack, and Fiona, a Pandoran con artist looking to score her biggest ever swindle.

The Wolf Among Us (New)
Fairytale characters are being murdered in this hard-boiled, violent, and mature thriller based on the award-winning Fables comic book series (DC Comics/Vertigo) by Bill Willingham. As Bigby Wolf — the big bad wolf — you will discover that a brutal, bloody murder is just a taste of things to come in a game series where your every decision can have enormous consequences.

Jurassic Park: The Game (New)
Security systems have failed and the creatures of the park roam free. Now, a rogue corporation will stop at nothing to acquire the embryos stolen and lost by Dennis Nedry. Experience a brand new adventure and see new areas and dinosaurs in this landmark game set during the events of the first Jurassic Park movie.

Tales from Monkey Island (New)
Sabers, skullduggery, romance! Tales of Monkey Island has it all! While explosively stripping the evil pirate LeChuck of his demonic mojo, Guybrush Threepwood inadvertently infects the entire Caribbean with the arch-fiend’s expelled voodoo. Pursued by a notorious cut-throat pirate hunter and a creepy Frenchman who believes that Guybrush’s eerily-infected hand holds the secret of eternal life, Threepwood sails the seven seas in search of La Esponja Grande, a legendary sea sponge with unparalleled voodoo exfoliating abilities.

Poker Night 2 (New)
The chips are down and the ante is up in this sentence already bursting with poker clichés! Take the fifth seat in Poker Night 2, at a table featuring Claptrap (Borderlands 2), Brock Samson (The Venture Bros.), Ash (Army of Darkness) and Sam (Sam and Max series). Your dealer is GLaDOS (Portal), but at no point will you be considered as a candidate for a visit to Aperture Science’s Enrichment Center. Unless you lose.

Sam & Max: The Devil’s Playhouse (New)
Wield psychic powers against fearsome foes in this epic comedy saga. In The Devil’s Playhouse, an otherworldly power for controlling matter and space calls to the strongest and strangest who might wield it — intergalactic warlords and eldritch gods, under-dwellers and scholars of the arcane. Gaming’s greatest dog and rabbit sleuths, Sam & Max, seek the power’s ancient secrets.

Sam & Max: Beyond Time and Space (New)
Join the Freelance Police for a 2nd season of adventure, crime fighting, and chaos! Sam & Max Beyond Time and Space is a harrowing adventure from the North Pole to the Fountain of Youth, from outer space to Hell and back. Babies will dance. Mariachis will sing. A giant battle robot will trash the streets. And when their friends are caught in the middle, Sam & Max will risk their very souls to set things right.

Strong Bad’s Cool Game for Attractive People (New)
Charming. Suave. Muscular. The Hottest. These are just a few of the words that Strong Bad uses to describe himself. In 5 actionsodes of perpetual awesome, Strong Bad claims his throne as the King of Style.

Puzzle Agent (New)
When inquiries about Scoggins Eraser Co. are answered only with curious puzzles, Nelson Tethers of the U.S. Department of Puzzle Research is sent on the case. As he overcomes logic puzzles, mazes, and riddles, he soon realizes that these — along with the townspeople, secret societies, and mysterious sounds from the forest — are intimately connected to the core conundrum.

Short of visiting your long-lost billionaire uncle’s house, there may be no better way to get instant access to hundreds of PlayStation games than the 7-Day Free Trial to PS Now. Epic adventures like The Walking Dead: The Complete First Season, Tales from the Borderlands, The Wolf Among Us, and more than 300 other games are all included as part of the PS Now subscription. So what are you waiting for?

Stay tuned for an exciting bunch of games next month!