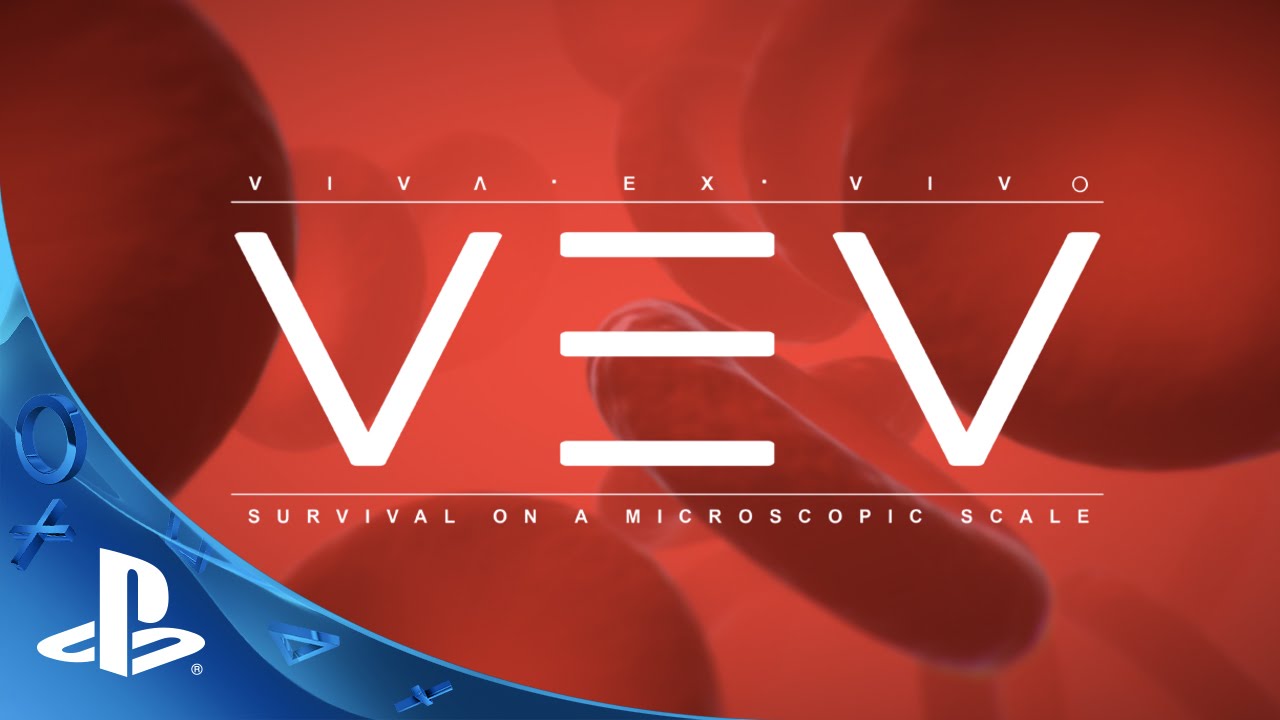 Hi everyone! Souha here from Truant Pixel. We’re proud to announce that our indie game VEV: Viva Ex Vivo will be launching this summer exclusive to PS4 with planned support for PlayStation VR.

The player assumes the role of a busy microbiologist in the not-so-distant future, whose research partner has taken off for the week for some much-needed R&R. Players will find they’ve been tasked with sifting through their partner’s notes, and completing their team’s work: researching biological samples using a nanoscale artificial organism capable of surviving in a multitude of familiar and foreign microscopic environments.

Dubbed the “Virtual Eukaryote Visualizer,” or VEV for short, this tiny, artificial protist acts as a surrogate explorer, similar in many ways to the unmanned aerial vehicles, or UAV drones, that we are familiar with today.

Rather than being a remote-controlled aircraft, however, it is a durable biological machine, remotely-controlled through an augmented reality computer simulation that allows the user to see the surrounding microscopic environment, only on a massive scale. Worlds normally smaller than the head of a pin become vast expanses to be navigated, owing to the technology of the quantum confocal microscope, or QCM, hardware that powers the VEV interface.

VEV Modules in the Calibration Matrix

A drop of water or a drop of blood becomes a vast, open field for players to explore, where they need to collect valuable organic particles and avoid competing and predatory organisms while testing the limits of the VEV module. As players gather organic particles from their surroundings, they will have two options to harness much-needed biological energy:

The downside to crosslinking is the risk of losing it all to aggressors in the environment.

Gameplay progression in Viva Ex Vivo is straightforward: explore your environment, find food, and avoid predators. Your ultimate goal is to gather the maximum amount of potential energy possible, and maximize your VEV’s functional lifespan within the time limit. Everything you do, from your swimming speed to your encounters with indigenous organisms, affects your base energy consumption rate.

Players will find themselves in a race against time and a race against entropy as they explore each sample, harvest energy, stay alive, and build that elusive high score.

Though we present VEV as a decidedly laid-back experience (players cannot harm or direct hostile actions toward other creatures), the game is by no means easy. All elements within every biological sample, including composition of the environment as well as placement of food and indigenous life, are randomly generated with each level load. Small ecosystems, including creature behaviors, tend to occur sporadically within each sample. Organic particles have a tendency to spawn within caves and other nooks and crannies, though they may also be found floating about in the open should they be displaced by a wandering microbe. In Viva Ex Vivo, feast or famine may be around every corner.

There are two kinds of stages in Viva Ex Vivo — “in situ” and “ex vivo.” For our purposes, in-situ refers to those samples in which you are viewing indigenous organisms in their native environment, such as a drop of pond water or a dollop of mud.

Ex vivo samples are samples of organic tissue taken from a larger organism, such as a drop of blood or a sample of cerebrospinal fluid. Between the two sample types, ex vivo samples will prove to be the more challenging, as elements of an organism’s immune system carried within the sample will see the VEV as a foreign invader and attack it.

This occurs because VEVs are created by hybridizing molecular machinery of common cellular species (such as staphylococcus and pseudomonas) that are infectious in larger organisms. These derived elements still contain antigenic potential which may activate a host tissue’s residual immune responses.

Viva Ex Vivo holds additional content for those players skilled enough to unlock hidden “research goals” with unique bonus levels for added value. Beyond these four sample types, the game also features added simulated calibration and challenge modes, based on the popular system software themes that your team has currently installed on their Quantum Confocal Microscope hardware. These modes will also provide players insight into the personality of their lab partner, known only as “S,” whose disarrayed notes cover their mutual workspace.

Viva Ex Vivo features a professionally composed mix of ambient electronic music, designed to fit the mood of each individual stage. Each song features evolving and dynamic elements based upon proximity to key elements within each stage, from the amount of accrued mass on your VEV’s surface, to the ominous drumbeats which signal approaching enemies

Viva Ex Vivo has been designed from the ground up for easy transition to VR. This includes everything from the control scheme to the 3D interface which is presented to the player at all times. VR mode will be offered as a free upgrade once it is available.

We appreciate the chance to finally share our game with everyone. As a first-time effort for our tiny company (Really, it’s just the three of us!), it has been a truly educational experience. We have other, larger projects in the works which we hope to bring you in the near future!