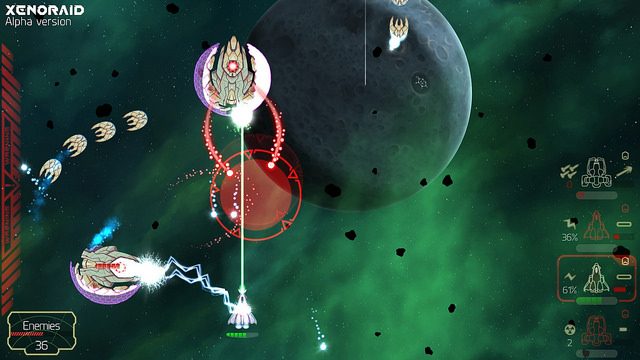 Hello everyone! I’m excited to be back on PlayStation.Blog to announce Xenoraid, a vertically scrolling shoot’em up with a unique feel driven by a great combination of features.

I’m personally in the driver’s seat of Xenoraid, and the whole concept of the game stems from the fact that I personally enjoy shmups. Or at least the shmups that preceded the bullet hell movement. To me, bullet hell games feel too much about memorization, dodging, and extreme precision. I prefer my shoot ’em ups to be about good old-fashioned blasting enemies to bits!

Xenoraid has minimal bullet hell traits. We set out to innovate on how we’d get the focus on the act of shooting, and make the game about destroying enemies in a deliberate and effective way. The first thing we did in the original prototype was make the starfighters turn lightly when moving left and right. In other words, the fighters don’t always point towards the top of the screen, which in turn grants the player the ability to fire in angles. It felt immediately great, and brought aiming into the mix of game mechanics in an awesome way.

When we had the aiming mechanics down, we took a hard look at shooting. It dawned on us pretty quickly that in order to make shooting matter, squeezing the trigger had to be a conscious decision. This, almost by itself, gives a cease fire a role to play as well.

After trying a couple of things around these ideas, a weapon overheat system was born. This means that in Xenoraid you can spray and pray, but you won’t be able to do that for very long. Constantly blasting will overheat your guns, and they’ll lock down for several seconds to cool down. This instills a sense of pressure on the player to actually aim a bit, to hit and destroy the intended targets instead of keeping the trigger down and counting on hitting something eventually.

The weapon overheat mechanic also works beautifully with the third major idea we wanted to incorporate. In Xenoraid the player goes on missions with four starfighters, and gets to switch between them at will. Having guns locked due to overheat is a great reason to switch in a fresh fighter. Other valid reasons include being on the verge of being destroyed due to taking too much punishment, or needing to bring in the big guns of another fighter to take down an enemy miniboss.

I, and everyone at 10tons, would love to hear your thoughts on this! Xenoraid will be released this year.