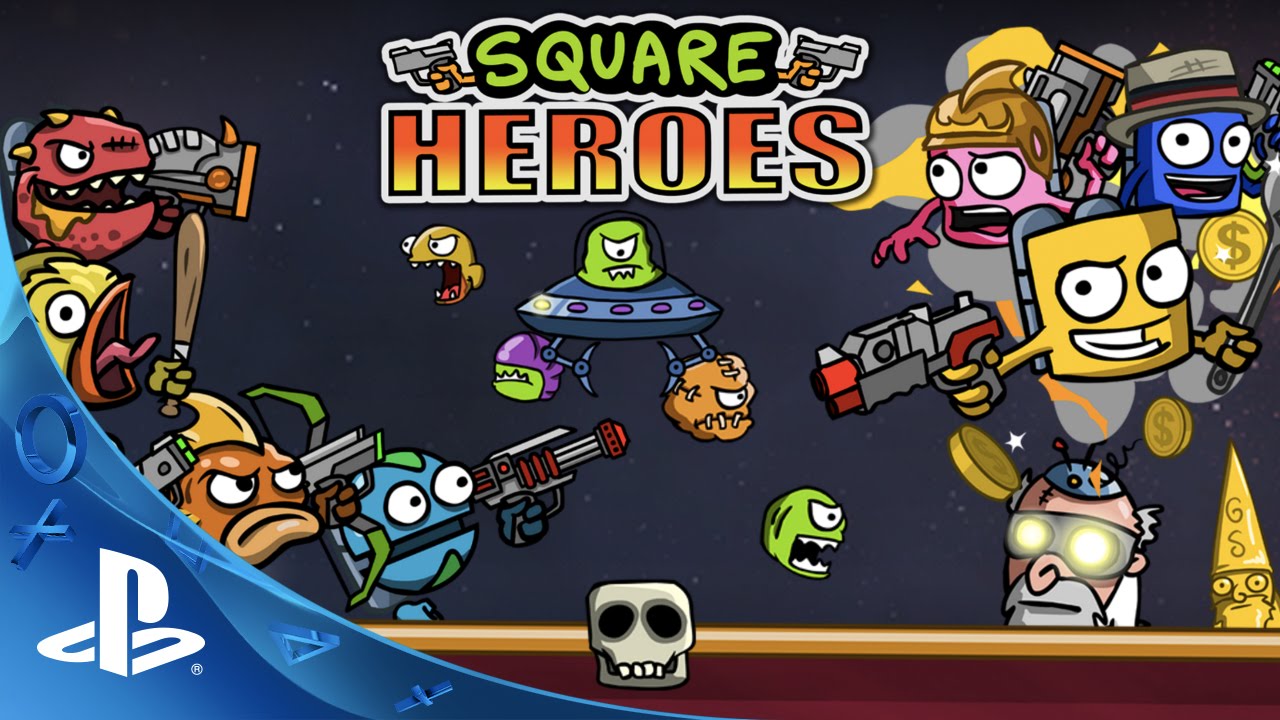 Fans of shooters, brawlers, and multiplayer mayhem should circle Tuesday, March 1st on their calendars: that’s when you can finally download Square Heroes on PS4! It’s been a long journey and the Gnomic Studios team can’t wait to see it in the hands of PS4 gamers.

There’s nothing more satisfying than mowing down your buddy, hearing them curse, and then doing it again just to rub it in. All of us at Gnomic Studios grew up playing games like that, and the design of Square Heroes has been driven by a desire to recapture that feeling and share it with others. It’s a great party game: easy to pick up, but hard to master — and most fun when played with friends.

Ideally you’d be sitting close enough to your friends to punch them in the arm when they frag you for the fourth time in a row. If that’s not possible, PS Plus members can play online. You can even play with a local friend and join online or LAN matches together, enabling couch vs. couch battles with no split screen.

Square Heroes was designed to work in high-ping conditions. Lag is rarely a problem and playing against people in different continents is entirely possible… no mean feat for a fast-paced, real-time action game.

No doubt all of us here agree that PS4 is the best gaming platform, but there are still those not lucky enough to own one. You may even be friends with some of these unfortunates, which is why we’ve made sure that you’ll be able to go up against PC players in online Square Heroes matches.

The game is a twin-stick shooter with no insta-bullets, bringing a level playing field to controller vs. keyboard and mouse. If you’re worried about griefers and cheaters, players can be kicked, matches can be password protected, and there is an option to restrict matches to PS4 players only.

How Does It Work?

Matches begin by choosing your loadout from the 30 weapons:

Initially, only the 1st tier melee weapon is available. Hunting (or “farming”) aliens and collecting their bounties pays for the next weapon you choose, culminating in destructive, explosive guns in tier 4 and bag weapons in tier 5. This unique mechanic causes a mini arms-race in each round and ensures gameplay changes throughout the match.

Square Heroes features a levelling system where you earn XP to level up and unlock 15 new guns and 15 melee weapons. Earning any of the 30 Trophies also earns you a bonus hat, which buffs certain stats and de-buffs others to balance. You can strategically choose your hat, melee and loadout to suit your play style and cause maximum carnage.

A variety of game modes are supported:

Square Heroes is the sequel to Square Off, an alien-survival-shooter released in 2009. The premise of the game is that in the distant past, the human race was nearly wiped out by swarms of invading aliens. A mad professor managed to blend alien DNA with his own to create our heroes and saviors: the Square Avengers.

After repelling and subduing the invaders, a period of intergalactic peace reigned. The Heroes however lacked an outlet for their awesome killing power. They grew bored and turned to fighting amongst themselves. The galaxy’s most deadly fighters were invited to participate in a Tournament to finally determine the most awesome warrior. They brought with them rumors of a malevolent presence in the far reaches of the galaxy.

Can the Heroes win the Tournament before it arrives?