Far Cry Primal: Why the Stone Age is a Brutal Battleground 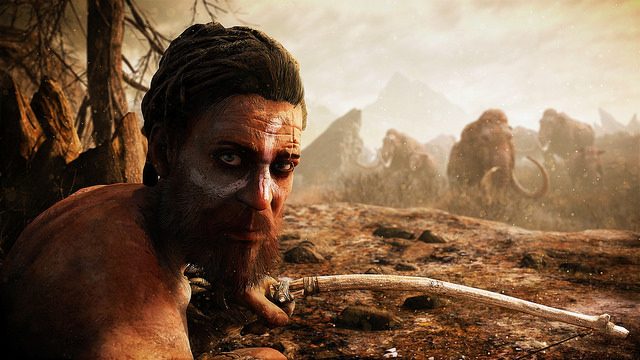 Next week, players will face the harsh and unforgiving wilderness of the Stone Age in Far Cry Primal on PS4. This gorgeous, open-world adventure follows a desperate hunter in his quest to find his lost people — and keep the hungry wilds at bay.

To celebrate the upcoming launch of Far Cry Primal, we reached out to Creative Director Jean-Christophe Guyot to learn more about Ubisoft’s latest project and how it differs from previous entries in the series (spoilers: it’s quite different).

A: In the prehistoric world of Oros, you will learn to hunt and tame the mega fauna as you climb the savage food chain in order to become the apex predator.

Q: If I never tried the Far Cry series before, will I be lost when I start Primal?

A: Each installment of Far Cry stands on its own, so you’ll be able to enjoy Far Cry Primal regardless of if you’ve played previous Far Cry games. We definitely hope you get lost in the savage and majestic world of Oros as never before.

Q: What separates Primal from the rest of the series besides its unique setting?

A: Dropping players at the bottom of the food chain with only rudimentary tools to start their journey enabled us to explore a very different angle for the Far Cry experience. Nature is savage and dangerous, the night is scary, and hunting animals plays a large role in surviving the Stone Age, not to mention the defense of your territory against other tribes.

The player’s toolset is completely fresh with an emphasis on crafting and includes the ability to tame wild animals and use them for combat and hunting.

Q: How has the design team approached such a drastic shift in tone, from modern ballistic weapons to Stone Age tools?

A: Far Cry is all about creating interesting dynamic situations in the world and giving the players a lot of toys to approach these in any way they want.

Because of these mechanics, our approach was to make sure the world was more dynamic than ever with systems colliding in unexpected ways. First of all, we introduced the mega fauna, giant animals that have since disappeared from the surface of the Earth. Second, we have two different tribes fighting for the place you want to claim as well. In order to hunt the beasts and take down the enemy, we’ve given the player a whole new toolset that ranges from brutal weapons like spears, clubs, and bows to throwable traps — and a new taming system that will empower the player to command wild beasts.

Want to stalk your enemies? Have a feline by your side who can silently take down your targets. Want to rush in with raging brutality? Send in your giant cave bear to attract the enemy’s attention. There are 17 different beasts to tame, including the infamous Badger.

Q: What has the setting allowed the development team to do that was previously impossible either technically or from a design perspective?

A: The beast taming and the density of the wildlife really come to mind. But the emphasis on surviving a dangerous world is also something that works well with the setting.

Q: Far Cry 4 had a mystical element to its story. Will we see anything similar in Far Cry Primal?

A: One of the characters you will meet in Far Cry Primal is Tensay: a crazy Shaman who creates mind-altering decoctions. You will have several opportunities to taste these and witness their effect. Apart from the refreshing and exotic aspect, we also wanted to explore how a shamanistic tribe would approach the mystical connection with the world.

Q: How do you create relatable and interesting characters that are so far removed from our modern reality?

A: It all comes back to thinking from the Stone Age perspective and looking for those aspirations and themes that translate well into modern narratives. For example: recovery from loss, fighting to ensure that the people you love survive, and draw strength from those people. These are a few elements that we give to the player as they embark on their new journey.

Q: How did you decide which animals to include, and which to leave out?

A: It was always about giving players great opportunities to play and interact with the world and have fun. Many animals were on the table at first, and then we thought about them in terms of gameplay.

The main interest of the mega fauna animals in terms of gameplay comes from the new behaviors we’ve given them for this purpose. For example, when faced with a threat, the Irish elk starts by fleeing, but eventually if it’s injured too much it’s going to turn berserk and fight its attacker. This can lead to a surprising turns of events for the player or for a pack of enemy AI that was chasing it. The Giant mammoth will come to the rescue of younger and smaller ones which can also lead to a very cool chain reaction. And so on.

Q: Did the development team take any creative liberties with the worldbuilding and creature design?

A: When it comes to world building we try to be as authentic as possible. So we met with a lot of specialists to learn about the Stone Age. Of course there are also a lot of things we don’t know about and gaps to fill but we aimed to make our world feel real and primitive.

The domain where we wanted to take some liberties was gameplay. Even if the general themes are in line with the period, we pushed the boundaries to give the player more fun things to experience. For example, humans were taming wolves to help them hunt mammoth — they probably never tamed a saber tooth tiger.

Q: What challenges did the team face when writing the AI and behaviors for these animals?

A: Having animals like the elder mammoth which is around twice the size of the regular mammoth forced us to adjust the navigation systems used by the AI, and we also had to adapt the structure of the flora and trees to make sure they had enough space. Other than that, the mega fauna animals — like all entities in our game world — are systemic AI. It means they are fully part of our gameplay ecosystem and will adapt naturally to their environment regarding dangers, other animals, fire, threat, navigation paths, etc.

And of course they will react to the player’s actions. That’s the plus of having a systemic approach to your gameplay — you can let the mega fauna live its life in your world and adapt to it naturally.

Q: How does Primal pace players in an open world? How much of the content is directed and how much of it is emergent/open?

A: Everything that happens in the world in terms of systems colliding with each other is not directed, and I must say that players will spend a lot of time watching crazy things happen as they interact with or observe the world and the world’s ecosystems. We of course have great cinematics which are scripted, but even the way we set up the narrative is up to the player to tackle at their own pace.

Q: What is your most memorable moment in Far Cry Primal?

A: One time I was walking at night and a band of wolves came for me. Suddenly they stopped and ran away. I thought, “Wow, I’m really getting the hang of this.” Suddenly I hear a roar and a giant, rare cave bear was behind me. Wolves were running because of the bear, not me!