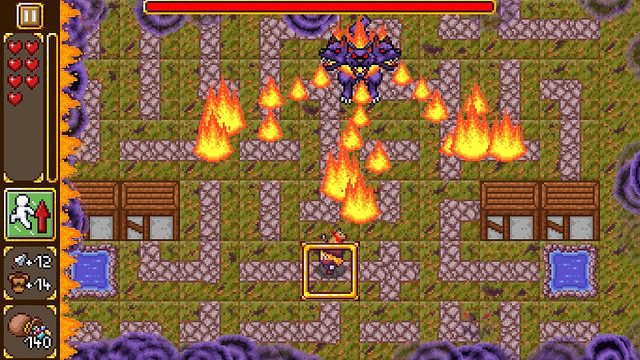 SwapQuest is a mix of a retro RPG with a tile-swapping puzzle game, inspired by classics like Pipe Mania. The idea behind it was to take many of the elements I loved as a child in console RPGs from the 90’s and blend them with a movement system more reminiscent of a puzzle game.

Out came SwapQuest on PS Vita, an easy-to-learn yet hard-to-master gaming experience that combines the development of your own character with puzzle levels that feel fresh every time due to their procedural nature. The game started small, but the concept took on a life of its own as more and more RPG elements found their way into the game.

The plan was to have SwapQuest ready after six months of development, but as the concept expanded the scope of the game became bigger — in the end it took more than two years to finish. In the beginning there were only the levels with treasure chests, enemies, and NPCs that would heal you or sell new weapons. As development progressed, the NPCs were removed to give them a more prominent role in the game. Additionally, a big overworld was added that the player visits between each level.

In order to increase the RPG aspect of SwapQuest even further, the Caravan was created to give the player the option to buy new weapons, upgrade abilities, or enchant equipment. All these additions helped expand SwapQuest from a puzzle game with RPG mechanics to an equal blend of both genres.

The PS Vita version of SwapQuest got almost a year of extra time to make it the most refined experience possible. To make it even more special, there is a lot of new content, including three new levels located on a mysterious group of islands, a massive new boss fight, and a new character class called the Tinkerer. The game started purely touch controlled, but by now the button controls have become my favorite way to play SwapQuest. As a life-long console player it feels natural and efficient, and I hope you’ll agree.

One thing I’m very proud of and would like to highlight is SwapQuest’s visuals by pixel art wizard Jussi Simpanen and the wonderful soundtrack by Symphonic Square. Without those two I could not have made SwapQuest, and they have my eternal gratitude for that.

The art style successfully manages to have a look reminiscent of the 16-bit days, while also creating a vibrant and rich world. Each level has a distinct feel to it and it greatly helps to make the game come alive.

For the soundtrack we purposely did not go for the typical 8-bit inspired chiptune music in order to have a more opulent scale fitting the big world you travel through. It gives the levels room to breathe and creates an excellent atmosphere to get into the flow.

SwapQuest started small but has grown so much in those two years, both in scale and in what I see in the game as a designer and player. It has become the most ambitious title I’ve worked on and I sincerely hope it will find many fans on PS Vita. Please let us know what you think of the game in the comments below. We’d love to get in touch with the PlayStation community.

Have a wonderful time with SwapQuest when it comes out on February 23rd!