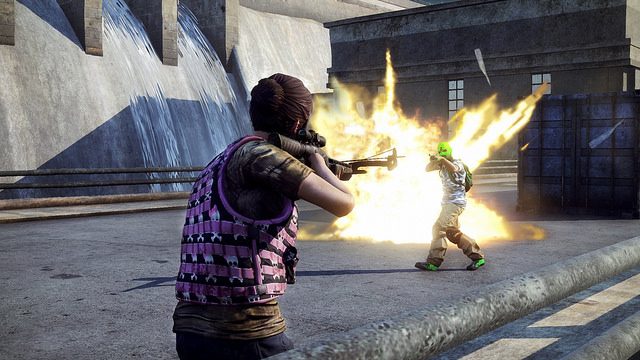 You drop into a high-intensity, arena-style grudge match. You activate your inner beast mode, gear up fast, throw together a game plan, and jump into the fray, ready to see if you have what it takes to be the last man standing. Whether you’re racking up a kill streak or just adding to the chaos, you’re ready to spill blood. After all, dying is for losers. Welcome to H1Z1: King of the Kill, coming to PS4 this Summer.

King of the Kill started out as a special game mode inside of the original H1Z1 (an open-word zombie survival game), but as we watched the popularity of the mode grow and grow, we knew it was best for the players to give these games dedicated resources so they could develop and flourish on their own merits.

King of the Kill is being developed as a fast-paced shooter that will be comprised of multiple fight-to-the-death game modes, including Battle Royale. Players will compete in large-scale chaotic PvP spectacles of skill, wit, and a little luck, where everyone must fight to the death to stand alone at the top of the podium.

Will you be the type to hide among the berry bushes, letting most of the crowd thin themselves out before you join the ruckus? Or are you going to dive in, guns blazing, adding kills faster than you can count? Which weapons will you grab first, and what other supplies will help take you to victory? King of the Kill game modes are all about scavenging and strategy (and, yes, a little bit of luck and a whole lot of crazy). King of the Kill also lends itself well to competitive play, as we saw in 2015 with our TwitchCon Invitational and in-house Showdown event.

We look forward to bringing you this fast-paced, large-scale, chaotic spectacle on PlayStation 4 later this year!