The Hardest Songs in Guitar Hero Live, as Named by Freestyle Games 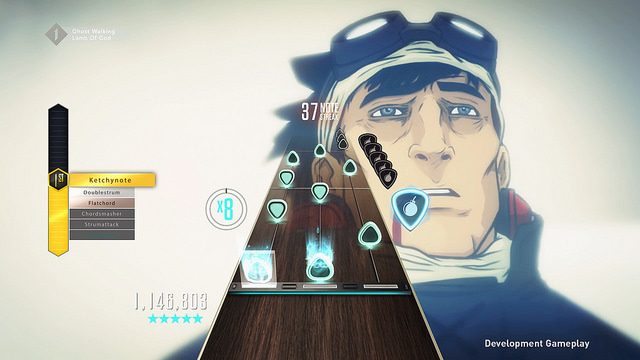 Guitar Hero Live launches on PS4 in just two short weeks! Rhythm game aficionados, myself included, have fond memories of their repeated attempts (and, hopefully, eventual victories) to conquer the series’ most difficult songs: Jordan in Guitar Hero 2, Through the Fire and Flames in Guitar Hero 3, and so on.

Naturally, when given the opportunity to talk to some folks from Activision, my first question was “What’s the hardest song in Guitar Hero Live?”

With their help, we’ve got a few different answers to those questions, as answered by members from the GH Live team at Freestyle Games. Onward!

“The track starts out with a soft acoustic into that is deceptively intricate, any mistakes here will really stand out. If you haven’t already given up, the driving verse riffs require tight, consistent timing. Keep up with the changes in tempo to make it through to the solo where you get a chance to show off. Then all that’s left is the endurance test that is the outro. Everything that you’ve played before means nothing if you don’t hold it down and nail the end. While all of this is going on, you may not have had a chance to take in the epic story unfolding in the animated music video. If you are really good enough you’ll be able to relax and enjoy the visuals while you shred your way to victory.”

Why is it so difficult (musically)?

This is a classic Lamb of God riff; that bluesy feel with technical curveballs thrown at you every so often finished off with some bar-crossing rhythms to catch you off guard. And of course, a savage solo melts your face off at the peak of the track. A tough one to get to grips with, but nailing the riff is really rewarding once you get the pattern.

Why is it so difficult (in terms of gameplay?)

The intro riff on the acoustic throws some fairly quick string skipping in there (black to white) mixed in with lots of open strums, so you have to become quite agile at changing strings. The next thing to get to grips with is the non-standard rhythm patterns that use the open strums as a pedal note. Finally, the solo; it’s just gnarly.

Any tips for getting through it?

The cool thing about GHTV is you can kind of listen to the riff a little bit and get your head round the pattern as it doesn’t kick you out. This is great for just building up patterns by playing ‘chunks’ of the riffs. This is how I nailed the intro riff for Ghost Walking, just step by step and build up the notes slowly. You could also drop down a difficulty, but that just feels wrong to me! Make sure you make the most of the hammer-ons and pull-offs (the glowing gems) so your strumming arm doesn’t get tired; and also nothing looks cooler than throwing some shapes while you nail a section one-handed (what?! It totally looks cool!). Lastly: the solo. This one might take some time to master; I’m still not there yet. Knowing the track is half the battle, so listen through it a few times to know when it goes up and down in pitch. Again, use those HOPOs to your advantage because you probably won’t be able to keep up if you try and strum all of it!