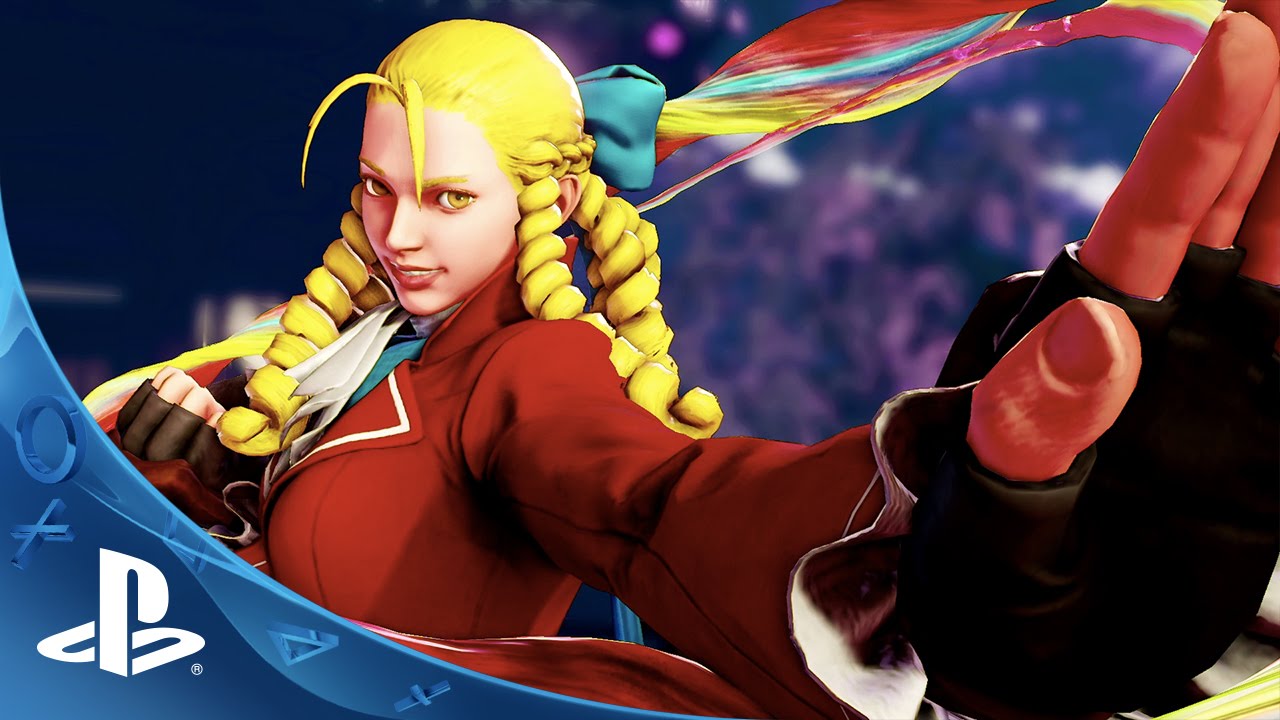 Hey everyone! Exciting news coming straight from Tokyo Game Show today! First off, the character that many of you have been waiting for to return to the Street Fighter series is finally back: Karin Kanzuki!

Two years ago, we held a worldwide character popularity poll to find out who the fans liked the most, and Karin came in 7th worldwide (1st when just looking at Japan results), despite having only appeared in Street Fighter Alpha 3. Today, we’re happy to reintroduce her to the series with a brand new design and play style.

Karin is the young heiress to the Kanzuki Zaibatsu, a global financial conglomerate that possesses vast wealth and resources. Her regal and pampered upbringing is what led to her high-maintenance attitude and razor-sharp wit. But behind her flowing golden locks lies a true martial artist obsessed with upholding her family motto, “In all things be victorious!” Karin is well versed in numerous martial arts, which she and her family combined to create a unique “Kanzuki style” of fighting.

Above: Karin in Street Fighter Alpha 3

In Street Fighter V, Karin is a well-rounded character, possessing a wide array of strikes and moves at her disposal for any situation. Utilizing her new dash move allows her to close the distance quickly between her opponents and go in for a quick high-low attack or throw.

And just when the opponent thinks they’ve figured out how to deal with the pressure, Karin’s V-Trigger completely changes up her game plan by allowing her to perform her signature Guren Ken multi-string attacks and variations. Players who enjoy attacking with speed and a large variety of tools will find Karin to be extremely satisfying to utilize.

Karin lunges forward with a devastating palm strike that dissipates projectiles and knocks down the opponent if it connects, all while helping to build her V-Trigger gauge. By holding down the buttons, players can charge the move for a split second, giving it better hit and block properties.

Karin channels her inner Ki to unlock the true potential of the Kanzuki fighting style, giving her access to the Guren Ken attack, which in itself possesses over half a dozen different follow ups and variations. After the initial Guren Ken, she is able to transition immediately into an overhead attack, a low sweep, a flying throw, another quick set of strikes, or even a backdash to bait out counterattacks. This gives her immense flexibility in controlling the flow of the fight, ensuring that she comes out on top.

Karin is playable at Tokyo Game Show, so be sure to stop by the Capcom booth if you are able to!

And if the return of one of the most popular characters in the series wasn’t enough, we have another big announcement: the Capcom Fighters Network!

The Capcom Fighters Network (CFN) is a community building tool that will be directly built into the online infrastructure of Street Fighter V.

Here is a list of some of the things that you’ll be able to do in-game via CFN:

We’ll have more concrete details on all the various CFN features at a later date, but just to whet your appetite, here are some work-in-progress screenshots. The main CFN screen shows the “heat map” and will look something like this:

Each blinking light on the world map represents a pocket of active users that are engaged in online battles. With the heat map, you’ll be able see where all the action is taking place and even be able to drill down to the individual players who are fighting, in order to check out their profile information, past match history, replays, and even send them a fight request.

As Street Fighter V will be at the forefront of our eSports activities upon release, we wanted to make sure that players had access to all the statistical data possible to help analyze their weaknesses and improve their game.

The game tracks not only online win/loss records, but fine detail stats such as “how many light punches did you land,” “how many throws did you tech,” “in what ways did you win the match,” and much, much more. We are confident that players will appreciate this new knowledge and use it to push themselves to the next level and rise above the competition.

Hope you all enjoyed this double dose of SFV news! Stay tuned for the next announcement because we still have a lot of surprises in store. Until next time!