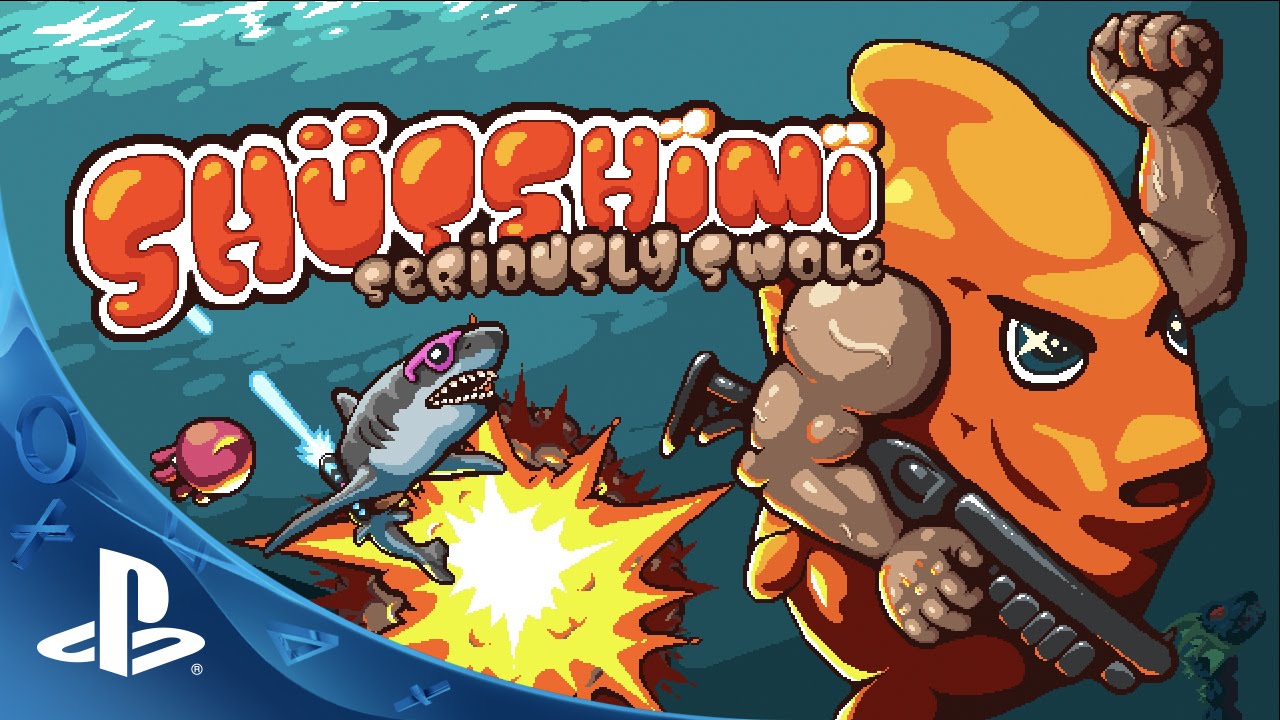 Hello! I’m Anthony Swinnich, one of the three people at Neon Deity Games who designed Shutshimi! The game is done, and we’re proud to announce it will be swimming onto PS4 and PS Vita on August 25th as a cross buy title, courtesy of our benevolent publisher Choice Provisions. That’s super soon!

We didn’t set out to reinvent the Goldfish SHMUP genre, but sometimes you go where the current takes you. Shutshimi began as a game jam project made in under 24 hours, but we fell so deeply in love with the concept that we decided to go forth and flesh it out into a full game.

Several months later we “finished” and released it into the deep blue sea, but we were still filled with a ton of great ideas, so we got to work on an update. That update spiraled out of control and became a vastly expanded version of the original game, adding 2-4 player local co-op, loads of wacky new power-ups, new and updated sprites and backgrounds, a ton of additional songs, brand new enemies and bosses, lots of extra hats, cross save and Trophy support, and even online leaderboards.

If this is your first time hearing of the game, Shutshimi is a Cute ‘Em Up about the story of The Fishy defending its home waters against an army of mysterious invaders. Squids, pelicans, reverse-mermen, bears, and more are overrunning the sea and it’s up to you to stop them!

Levels normally last ten seconds, then the player has ten seconds to pick a power-up from the shop for the next round. However, The Fishy has a horrible memory so these power-ups are often forgotten as quickly as they’re found. Did we mention that only three are available each time, and they’re pulled down from a pool of more than 50, or that some are good and some are bad? It’s up to you to pick the best tools for the job, but it’s easier said than done! The ten-second time limit for the Mad Libs-style item descriptions will pressure you to read fast, think fast, and choose fast.

Now that development is done, we’d be remiss not to make note of the help and guidance we’ve received from our publisher, Choice Provisions. Their expertise and experience have aided us in creating a game we think is an incredibly strange but fun ride, and that’s something we’d say even if they didn’t threaten to cancel our deal and never release us from their basement! (Seriously! Call the police! The rats here are jerks!)

All of that said, we hope you’ll dive in and get your feet wet with Shutshimi. We’ll be floating around if anyone has any questions!