Everybody’s Gone to the Rapture: Orchestrating the End of the World

The end of the world is nearly upon us. Everybody’s Gone to the Rapture now has a release date of August 11th and the team is working exceptionally hard on the final few touches to ensure that the game is as perfect as it can be. As you read this I’m in L.A. with our brilliant sound designer Adam Hay and the wonderful Sony sound and music team doing the final mix of the game. I can’t believe that this time has finally come- it’s scary and exciting in equal measures because it means that there are no more changes: no more “can we just try”, no “how about if we”, no “I think we should” – just the knowledge that for better or worse, this is how the game will sound on release. *sobs into gin-soaked pillow*

As well as being The Chinese Room composer I’m also joint studio head, and working on this game has been a blast. Of course there have also been times when I would have chewed my own arm off to leave the development, but that’s how it goes on long projects! I know this game so well – I know every rock, every VO, every blade of grass. This level of immersion in the game world has enabled me to write a score that is a love letter to the game and the characters within it. Every main character has their own distinct musical theme (think Peter and the Wolf but for the apocalypse) and the music helps to gently guide you round the world as well as providing the emotional core of the experience.

All we want as artists I think is to keep getting better; we strive for the thing that is always out of reach. The music for Everybody’s Gone to the Rapture was a real challenge – being set in the ’80s there was perhaps an expectation that I’d write a synth-driven retrotastic score. I tried that and when we put it in the game it simply didn’t work. The world that the team has created is so timeless and it just felt wrong to impose a heavy-handed pastiche onto the environment. So I decided to create what I hope is timeless music; music for an England that only ever existed in the imagination. 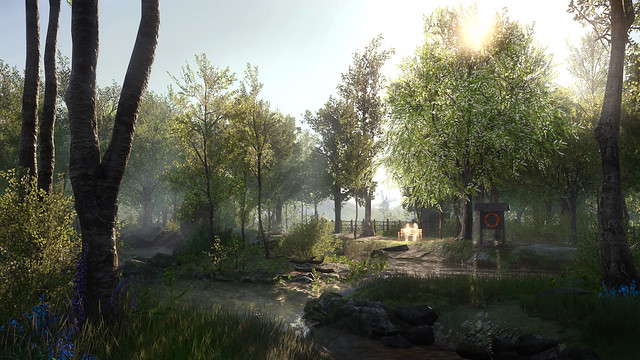 Being afforded the opportunity to write beautiful music for this incomparably beautiful game has been a true honour. To record at the world-famous AIR Studios was a career defining moment for me. As I stood watching and listening to the assembled group of phenomenally talented musicians and singers I had to pinch myself to make sure I wasn’t dreaming. I was lucky enough to have this very special time documented by Sony and you can watch the video on this page to get a taste of the music of Everybody’s Gone to the Rapture and an insight into how it was created. The end result is — I hope — rural, dream-like, lyrical, passionate, poetic and most of all an encapsulation of that this game is all about: a celebration of what it is to be human.

Come and visit us at GoneToTheRapture.com.