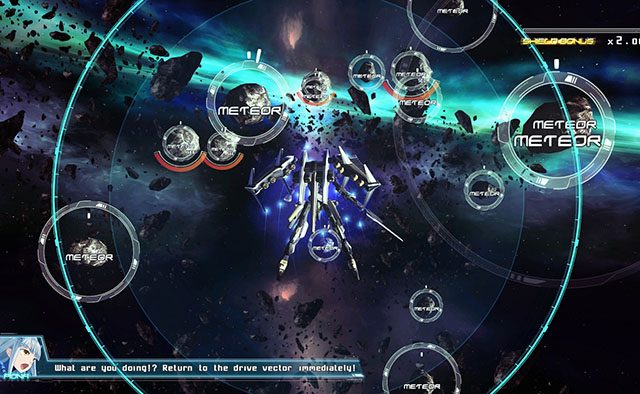 Hey everyone! Nayan here for Playism. We’re all busy with a ton of projects, but one thing we’re always hard at work on is bringing amazing Japanese indie games to western shores, and what I’m here to show you today is one such title.

Originally released on PC, Astebreed is a shoot-em-up with a cinematic twist: once you climb into your mechanized warmachine, you’ll be screaming through every environment shooting lasers and missiles at everything around you. While all this chaos is going on, the in-game camera seamlessly swoops around you, changing the game from side scrolling shoot-em-up to vertical and more.

You’re never quite sure what’s coming next.

Standing on the Edge of Oblivion

In Astebreed, your warmachine has access to two powerful weapons: the thought-controlled Lucis system, and a large sword capable of cutting through anything.

The Lucis system is a swarm of nodes that float around your mech, firing lasers. You can either rapidly press the fire button to fire lasers in a straight line, or lock onto enemies and command your Lucis nodes to close in and deal serious damage. While Lucis nodes are locked on a target, however, your available firepower decreases. It’s a good thing you have that sword.

The blade you’re equipped with is not just large, it’s incredibly fast. At close range, you’ll be able to slice enemies open with blindingly fast swipes, ending encounters almost instantly. Using these two unique weapons in tandem is the key to survival (and a high score, of course).

Bringing the War to PS4

When Astebreed developer Edelweiss decided they wanted to bring Astebreed to PS4, they looked at it as a chance to revisit the game and add aspects to the game that they weren’t able to do with the original version. It was also a chance to take advantage of what PS4 has to offer.

Graphically, the PS4 version of Astebreed has gotten a facelift. It now runs at a solid 60 frames per second at 1080p, and with no screen tearing, thanks to Vsync. The team is also utilizing emissive lighting and improved texture compression, and upping the quality of the 3D models and textures just for the PS4 version.

That isn’t the only addition we’re bringing to Astebreed on PS4! We’ve added a bunch of new upgrades to your mech, including the ability to control the direction of your focused targeting system using the right stick, and the ability to instantly dash. We’ve also adjusted enemy patterns and placement, and created a new “Arrange Mode” in addition to the initial version’s “Original Mode.”

We’re super pumped to bring Astebreed to PS4 in North America, and we can’t wait all of you to get your hands on it on the 25th.