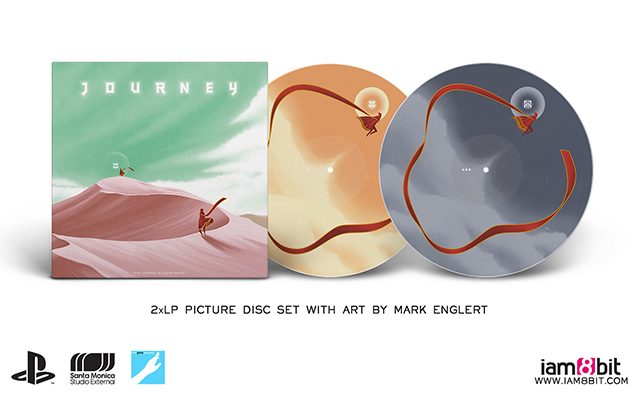 Hello again, PlayStation fans! Here at iam8bit, we’re huge fans of Journey. It’s a masterpiece — and we can’t wait to relive its epicness when it arrives on PS4! Last week, I had the pleasure of sharing a behind-the-scenes look at the Hotline Miami 2 Collector’s Edition vinyl, and I’m back today with some very special news about Journey.

iam8bit is proud to announce the soundtrack from the critically acclaimed PlayStation-exclusive video game Journey will be available on vinyl for the first time. The result of a superfun collaboration between SCEA Santa Monica Studio and indie developers thatgamecompany, Journey features stunning visuals, innovative cooperative gameplay, and an amazing music score performed by live orchestra and featured soloists. Composed by Austin Wintory, the music from Journey tells a story of its own and enjoys the honor of being the first video game soundtrack to be nominated for a Grammy Award.

We teamed up with acclaimed artist, Mark Englert to create an original album cover that honors the beauty and emotional voyage that players experience when traversing the world of Journey.

iam8bit began 10 years ago as an art show — so naturally, we view EVERYTHING as a canvas, including vinyl records. This set includes two picture discs, featuring unique art on each side (For math junkies, that’s FOUR different sides of visual goodness!). The scarf of the Traveler wraps around the album’s perimeter, creating an almost hypnotic effect as it spins. If you pay close attention to the Traveler’s robe, you’ll notice that the embroidery becomes more ornate as you progress from side A to side D — just like each time you beat the game.

The gatefold jacket opens up to reveal the soundtrack credits, as well as the beautiful ancestor painting seen in the game.

We know that not everyone has a record player, so we’ve also had the gorgeous cover art EXPANDED into a gigantic 12 x 36-inch screen print that’s just dying to be framed and hung on your wall. (For printing nerds, it features nine colors individually layered atop one another, creating the illusion of a wide spectrum of both texture and tone). We’ve even applied some specialty inks, including pearlescent metallics, which give the sand a stunning, shimmery effect that catches the light in a pretty magical way.

These prints are available in a very limited edition of 350… and come signed and numbered by the artist.