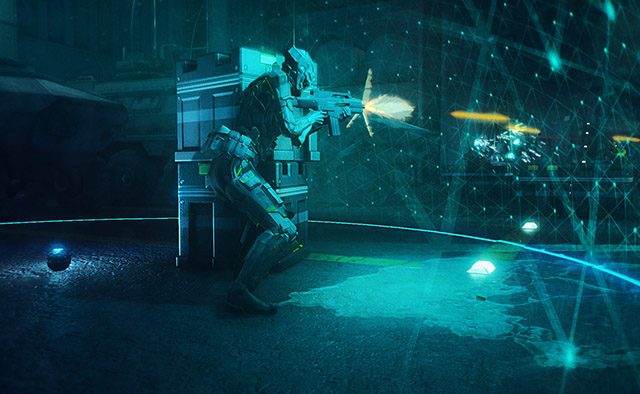 Billy from Ruffian Games here, to give you some info on the fantastic game that our team has been hard at work on — it’s called Hollowpoint, and it’ll be available on PS4 this year.

At the highest possible level I would describe, Hollowpoint as a four-player, cooperative, online game that blends tactical and action-packed combat experiences with procedurally built levels and a neverending supply of enemies, with a full progression and customization focused meta-game to support it all. That’s quite the mouthful of gaming goodness, but what does it all really mean?

The game is played in large 3D cross section environments, made up of multiple exterior areas, internal rooms and corridors, and stairwells that connect them all together — imagine a huge ant farm, but replace the ants with groups of well-armed men and women trying to kill each other with big guns.

The players are constrained along the 2D axis at the front of the scene near the cross section — or the glass of the ant farm — so they can move along the 2D plane running, jumping, grabbing, moving in and out of cover, etc. The Enemy has free reign of the full environments, they emerge from the distance and, depending on the enemy, they will find good cover positions to attack from or they move from cover to cover as they move towards the 2D plane where they are most dangerous.

The player can fire directly along the 2D plane or they can seamlessly switch to fire into the depth of the scene at the touch of a button. It’s a really interesting and intuitive mix of an old school 2D platform shooter and 3D shooting gallery gameplay that I’ve not seen another game use in this constantly switching, seamless way. This is the core mechanic of Hollowpoint that everything else is built around.

The game can be played alone, and it’s a lot of fun, but it really comes alive when you play online with others. Playing cooperatively with up to three other players isn’t just about safety in numbers; it’s much more than that. If one of your Hollowpoints gets injured in a co-op game, they can be revived by one of your teammates, but in a solo game the only option is to teleport the injured player out and switch them with one of your backup Hollowpoints, leaving you a man down — you can only bring a maximum of four Hollowpoints into any Contract (what we call missions in-game).

Many of the Abilities that you have are team buffs that are transferred to any teammates who are within effective range when the Ability is activated, so activating them alone doesn’t allow them to be as effective as they could be. Every enemy kill that you or one of your teammates makes will provide a reward of XP and pickups for Ammo, Credits and Health. These exact same rewards are also given to any teammates who are close enough when the enemy is taken out.

Playing solo means you can only tackle one room at a time, but if you have teammates you can deal with threats in multiple rooms at the same time, allowing you a much better chance of completing the Objective faster and getting a Gold Level Credit Bonus. All of this on top of the obvious rewards of simply dividing the attention of the enemy and providing more firepower to take them down. Alone you are powerful, together you are unstoppable!

There’s still a lot more involved with Hollowpoint, how the procedural environments and the Contracts are pieced together to create constantly varied experiences, all of the different Objectives that make up the Contracts, all of the different Weapons, Abilities, Powerups, and Suit Attachments you will use, and how they’re all accessed and upgraded — essentially the entire meta-game…

…But there might be a word limit for this blog post and we shouldn’t give away everything just yet, so we’ll talk more about all of that in the future. Until then, find some great co-op partners to team up with so you can take on Hollowpoint later this year.