SmuggleCraft Brings a New Kind of Racing to PS4 Next Year 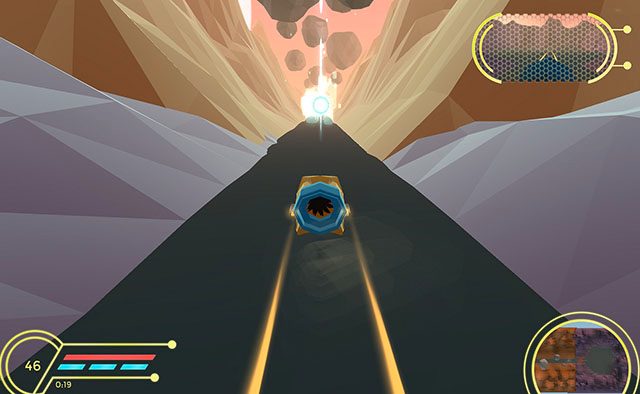 Hey all! We’re excited to tell you all about our new game, SmuggleCraft, a quest-based hovercraft game that will provide a fresh perspective on the racing genre. No more driving in circles; way more intense smuggling of questionably-legal contraband!

The concept for SmuggleCraft started small: a simple hovercraft racing game with randomly generated tracks, and the hope of doing something new in a long-established genre. Our team at Happy Badger Studio has been making casual mobile games for about 4 years now, and while we all wanted to work on something bigger, it never seemed like the right time. It seemed logical to us to keep the idea for SmuggleCraft as small as we could, while remaining true to our original vision.

We decided to spend about four months in development, which was actually longer than we’d spent on any of our recent projects. The hope was to make it as good as possible as quickly as we could so that we could get back to our safety net of doing work for clients (aka, how a small indie studio pays the bills).

We created a prototype and showed it to some good friends and local industry peers, who all gave us really positive feedback on the concept and gameplay. We were excited; SmuggleCraft was turning out to be really fun, and as our excitement for the game grew, so did our ideas. We quickly realized that there was no way we could do everything we wanted to do in the short timeframe we’d given ourselves. After serious consideration, we decided that it was time for us to take the plunge and dedicate the time to making our studio’s first large-scale game.

Over the past six months of development, SmuggleCraft has evolved into something we all really love and believe in. We’ve added in an immersive story through quests, which drive a branching narrative with alternate endings. We’ve also decided that, in lieu of simple hovercraft upgrades, we’re going to add in a robust crafting system that will allow players to create modular parts with which they can build the ideal ship for their play style.

The game has grown visually as well; our terrains have evolved from simple paths to complex landscapes, beautifully rendered with a minimalist 3D style. Basically, the whole game has become something we’re really proud of.

Our whole team is venturing into new territory with SmuggleCraft. Working on this game is allowing us to push ourselves to learn new skills, hone existing talents, and work on things we’ve never done before. We have a lot of hard work ahead of us, and we’re putting a lot at risk by working on a game of this scale, but it’s worth it to us because we believe in it.

What started as a simple idea for a small mobile game has grown into something much greater. We’re thrilled to announce that we’ll be developing and launching SmuggleCraft as console-exclusive for PS4 in Spring 2016. While we still have about a year of development ahead of us, we know we’ll have lot of stories and announcements along the way; we hope you all join us on this exciting adventure!