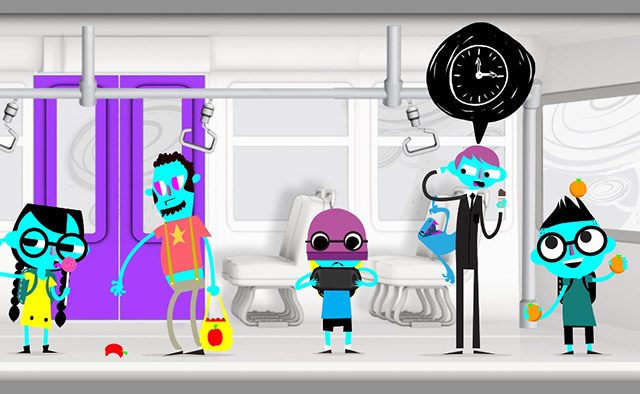 Normally when you forget your backpack on the way to the bus stop, you either leave it behind or run back home to get it. In Nia’s case, however, her backpack is a living monster named V. And V is trying real hard to catch up to Nia before it’s too late. Also, he may start the apocalypse along the way… All part of the fun in MonsterBag, which launches this week exclusively on PS Vita.

MonsterBag is a colorful, charming puzzle game about avoiding the humans that stand between Nia and her backpack. It’s also a little terrifying, and will require your full arsenal of skill and wit to get through. In the process, you may or may not begin the apocalypse, which is a pretty awful thing to start over a forgotten backpack. As a bonus, it’s free for PS Plus subscribers this month!

Also, the critically-acclaimed action RPG bastion is coming to PS4 this week. If you got a super-charged kick out of Transistor last year, see the original project that put developer Supergiant Games on the map.

Aaru’s Awakening
PS4, PS3 — Digital (Cross Buy)
When Aaru’s Awakening started out as a school project at the University of Reykjavík, the team wanted to create an original platformer. They thought the genre is congested, so new ideas were essential. Inspired by the teleportation gun in Unreal Tournament, the team came up with the idea of a teleportation themed platformer.
Bastion
PS4 — Digital
Bastion is an action role-playing experience that redefines storytelling in games, with a reactive narrator who marks your every move. Explore, upgrade weapons, and fight your way to victory.
Dark Souls II: Scholar of the First Sin
PS4, PS3 — Digital, Retail
The definitive edition of Dark Souls II, including all the Dark Souls II content released to-date in one package. Upgraded visuals leap from 30 frames per second to a targeted 60 frames per second with 1080p gameplay, adding a whole new level of smoothness.
Element4l
PS Vita — Digital
Element4l is an immersive and experimental platform game, with a strong focus on flow and smooth gameplay, wrapped in an exceptional soundtrack by Mind Tree. In Element4l, you control four elements that are bound together on a journey to shape life. Your only hindrances are nature and the sun. It takes a different, innovative approach to classic platform games and challenges you to rearrange your reflexes.
Krinkle Krusher
PS4, PS3, PS Vita — Digital (Three-Way Cross Buy)
Krinkle Krusher is an action castle defense where you cast elemental spells to defend your kingdom from twisted and hungry creatures called Krinkles.
After several generations of peace, they happen to come back exactly when the Ancient Tree bears its first fruits in centuries, and of course a cake was made from it.
MonsterBag
PS Vita — Digital
Forgetful Nia leaves behind her monster backpack, V, on her way to the bus stop. In a world afraid of monsters, help V catch up to Nia while avoiding being seen by the humans. Oh, yeah! Watch out for the apocalypse.
Stealth Inc. 2: A Game of Clones
PS4, PS3, PS Vita — Digital (Three-Way Cross Buy)
Stealth Inc. 2 is a puzzle platformer where you play the role of a clone escaping a sinister and high-tech testing facility. Stealth Inc. 2 tests both your brain and your reflexes across 60 varied levels linked together in a sprawling overworld. Death is never more than a few moments away, but one of the few advantages of being a clone is that death isn’t all that permanent.
Tower of Guns
PS4, PS3 — Digital (Cross Buy)
Tower of Guns is a fast-paced, bullet-hell, first person shooter with randomized levels and enemies, power-ups, epic bosses, and tons of unlockable items and weapons. You never know what to expect next! It is a pure FPS experience for players who just want to shoot stuff, battle gigantic bosses, collect loot, and upgrade their abilities.