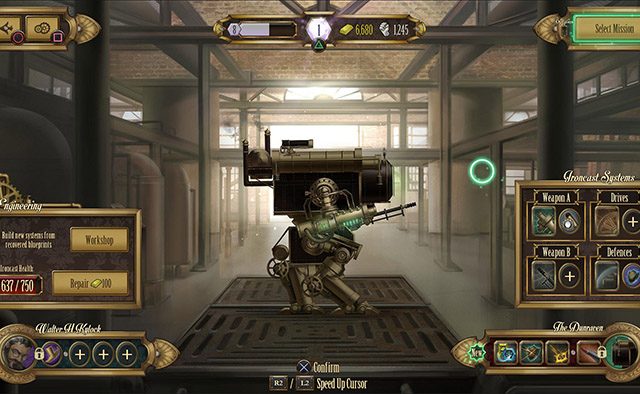 Hello there, PlayStation fans! My name’s Daniel Leaver and I’m the lead designer at Dreadbit — a game developer from Guildford, England. I’m a long time PS.Blog reader so it’s truly something special to be able to write a few words here today.

Whist Ironcast is Dreadbit’s first console game, I’m personally no stranger to PlayStation development. I’d previously worked at Media Molecule as a senior designer for about 8 years, helping to craft levels and features for LittleBigPlanet, LittleBigPlanet 2, and more recently Tearaway on PS Vita. However, Ironcast is the game I’ve always dreamt of making!

Ironcast is a game of steampunk mech combat, set in a fictional version of the Victorian Era. Inspired by science fiction writers such as H.G. Wells and Jules Verne, Ironcast is set in an exciting alternative history; a time when refined men and women in top hats and bonnets commanded gigantic walking war machines, laying waste to the enemies of the British Empire!

You’ll take control of a 7 meter tall walking vehicle called an Ironcast. You must face off against an invading force of enemy Ironcast in order to defend 1880’s Victorian England.

Battles are fought by generating resource nodes which in turn drive the Ironcast’s various weapons and systems. Players must choose how to spend these nodes wisely, either offensively in order to cripple and destroy their opponents, or defensively, if they suspect a barrage of incoming weapons fire is due.

On the surface the game may look like your standard puzzle game, but in action it’s a lot more involved than that. Nodes are collected by linking three or more of the same color symbol from the grid. Each color represents a different resource; orange for energy (powering your Ironcast’s shields and defensive systems), purple for ammunition (used to fire your weapons), green to repair the damage sustained in battle, and blue to cool down the Ironcast’s engines. They might be amazing machines, but this is steampunk — if technology’s not overheating, you’re not doing it right!

You can only make 3 matches from the grid per turn, so if you haven’t collected the correct resources from then you won’t be able to activate the systems you may want to, meaning that you’ll need to plan your node collection patterns wisely. Anything less will ensure that you’ll end up as a pile of flaming wreckage!

The core of the game is a Roguelite campaign, featuring character levelling, numerous mech systems and weapon upgrades, and randomized loot and mission content. Players choose their Commander character and Ironcast mech, both coming with unique skills and gameplay modifying abilities. Missions are randomly offered to the player from a selection of 75 unique scenarios, meaning each playthrough will be different from the last.

Players also earn Scrap metal from matching yellow nodes and defeating enemies throughout the game. They then spend this Scrap resource on Ironcast upgrades, and constructing weapons and defensive systems, salvaged from the wreckage of their defeated opponents. It’s important that players try to keep ahead of the curve where possible to ensure that they’ll be strong enough to survive the boss encounters.

The goal of the campaign is to repel the invasion of enemy forces before they reach the capital, London. Players have 9 days (which is the equivalent of 9 missions) to prepare themselves before the boss encounter itself, gathering experience points, scrap metal resources, and men and women who will help the player combat the enemy Flagship Ironcast.

I thank you all for reading this far. Ironcast is a unique and challenging game. I’m sure you’re going to love it when it launches on PlayStation 4 later this year.

Daniel and the Development Team