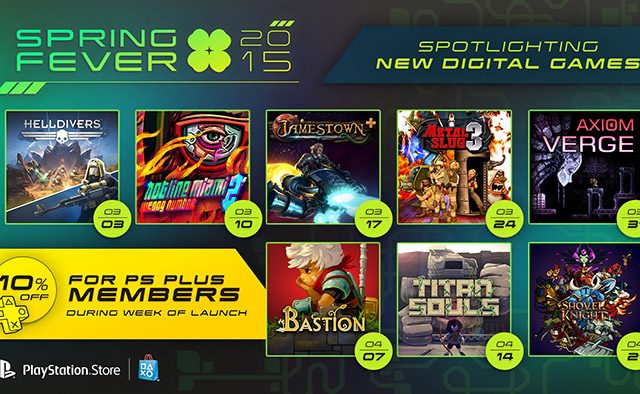 Hi everyone! March is here, and that means it’s time for our annual Spring Fever promotion with discounts for PlayStation Plus members on hot new digital-only games each week. This year, Spring Fever is going to last eight weeks – that’s twice as long as last year – with new PS4 games launching each week. 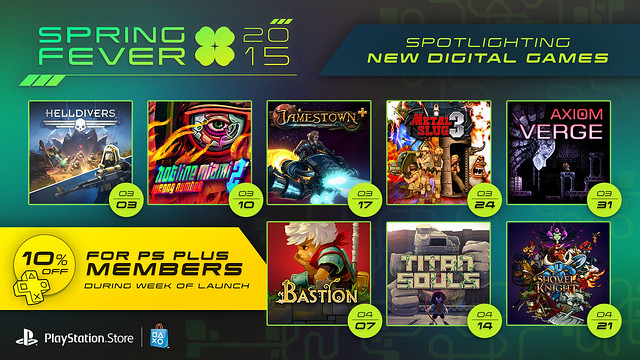 Over the next two months, we’re shining a light on some of the most unique titles coming to PS4 from incredibly talented developers and discounting their games for PS Plus members during each game’s launch week. This year’s lineup features PlayStation console-exclusive titles, as well as classic franchises making their debut on PS4. And if you haven’t made the jump to PS4 yet, don’t fret – a number of these games are also launching on PS3 and/or PS Vita as well.

Spring Fever kicks off next Tuesday, March 3rd with the launch of Helldivers from Arrowhead Game Studios. It’s a hardcore twin stick shooter perfect for four-player co-op madness. PS Plus members can pick up Helldivers next week at a sweet 10 percent discount. Here’s the full Spring Fever lineup:

Along with the new game releases, we are also featuring sales on popular video game and movie franchises each week.

Come back to PlayStation.Blog over the next two months for more information on each week’s new release, and to find out which games and movies are on sale as part of each week’s franchise sales. Happy Spring Fever!

Note: All pricing is for U.S. only and subject to change without notice.