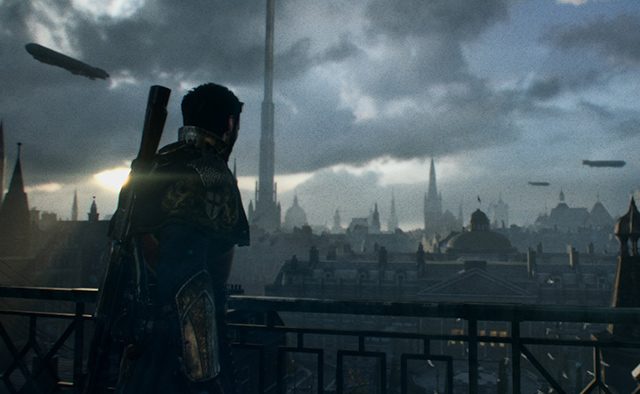 London. 1886. In a Neo-Victorian landscape embroiled in political strife and otherworldly war, a small company of knights protects humanity from the Half-breed threat. But the kingdom’s enemies approach not only from without, but within, and Sir Galahad must endure yet further conflict in a centuries-long struggle. Welcome to The Order: 1886, out this Friday exclusively on PS4.

The Order: 1886 pushes the PS4 to new limits with some of the most painstakingly detailed visuals in gaming. Guide Sir Galahad through a battered kingdom and uncover dark secrets that threaten to poison the very people he fights to protect. This third-person shooter features life-like characters, exquisite motion capture performances, pulse-pounding action, and a stirring score to accompany Galahad’s quest.

For a full list of games coming to PlayStation this week, read on. And enjoy The Drop.

Deadman’s Cross
Vita — Digital
Head out with your sniper rifle and an arsenal of other weapons to hunt down Deadmen. It’s always open season on the undead! Then prepare for card battles. The Boneyard is the site for The Deadman Duels — a popular television program that pits one zombie horde against another in a gruesome fight to the undeath. Join the excitement by going head-to-head with players from around the world, and climb the global ranks.
Dead or Alive 5 Last Round
PS4 — Digital, Retail
The final word in fighting entertainment. Two new playable characters join to make the largest roster in series history! Two fan- favorite stages make their triumphant return with updated graphics and gameplay. With new effects and skin shading technology, the hottest fighters in gaming look better than ever!
Hand of Fate
PS4 — Digital
Beyond the thirteen gates at the end of the world, the game of life and death is played. Draw your cards, play your hand, and discover your fate. Hand of Fate is a hybrid roguelike/action-RPG/deck builder, in which the player builds a set of cards into a deck, which is then used to deal out the dungeon floors through which they adventure.
The Order: 1886
PS4 — Digital, Retail (Available on 2/20)
The Order: 1886 introduces players to a unique vision of Victorian-Era London where Man uses advanced technology to battle a powerful and ancient foe. As Galahad, a member of an elite order of Knights, join a centuries-old war against a powerful threat that will determine the course of history forever in this intense third-person shooter, available exclusively on PS4.
Paparazzi
PS4 — Digital
Paparazzi is a two-player game of cat-and-mouse. The celebrity runs, dashes, and hides while the paparazzi tries to take constant photos of them. It’s a simple yet competitive arcade-action game! It’s a test of focus and reflexes and a silly take on celebrity culture.
Pillar
PS4 — Digital
Lost in an intimate snowy town, a palette of individuals are in search of a mysterious artifact said to bring great knowledge and understanding. Lead each character through their quest in this collection of mini-games, each with unique personalities and challenges… maybe their paths aren’t so different after all.
Q*Bert Rebooted
PS4, PS3, Vita — Digital (Three Way Cross Buy)
One of the most critically acclaimed and commercially successful arcade games of the 1980s is back in its classic pixel perfect 2D form, and a re-imagined Rebooted version with state of the art 3D game play and graphics that remain faithful to the original concept. Both versions are exciting twitch games requiring keen puzzle solving skills and logic.
Treasures of Montezuma: Arena
PS3 — Digital
Fight to survive! Help Montezuma make his way through the dark catacombs of a sinister ziggurat. Master unique gameplay mechanics combining traditional “match-three” puzzles, turn-based battles, and role-playing elements. Use ancient artifacts and mighty totems to fight bloodthirsty creatures!
Trivial Pursuit Live!
PS4, PS3 — Digital
A modern twist on the world’s most well-known trivia game. Trivia has never been so much fun. A more modern look, new reinvented question types, and the world’s best questions from the world’s top trivia authority.