Remember the time Alad V threatened the entire Solar System with revenge shortly after we discovered his secret ships filled with Infested Corpus? It didn’t seem like the best idea at the time, but then again when you’ve been kicked off the Corpus board and denied any chance of future Profit, what other options do you have? Besides getting a normal job that is. Blegh!

Well after a few months of planning, Alad V has finally returned, and the results of his experimentation have been set loose upon us all. Brand new Infested machines are at his disposal, alongside rumors of a secret weapon that could even have Warframes at his twisted command.

Sharpen those blades and ready your weapons, Tenno. The Mutalist Incursion has arrived.

Infested are invading the Solar System in unprecedented numbers, and with each passing day more nodes fall under Alad V’s influence. Fortunately we all know the solution to Infested is just a pinch of fire, liberally applied around the face, body, and limbs of any aggressive organism. Some Tenno have reported having success with other weapons, but why would you waste time shooting something when you could light it on fire instead?

Either way, you’ll need to work together in order to keep Alad V’s forces under control. New Mutalist Incursion Alerts will reveal where the latest Infested forces have begun appearing, and Infested Invasions will be your only shot at getting the Nav Coordinates you’ll need to track down the source of this new threat.

As Operation: Mutalist Incursion progresses, new Infested and Bounties will slowly be unlocked, each with their own unique rewards. Complete all bounties to unlock a special survival mission rewarding a brand new set of Puncture Mods! Not only that, but anyone who missed the Tethra’s Doom Mod set will have a chance to grab them as random drops throughout the bonus survival mission.

While every Tenno is a master of gun and blade, the new Warframe Mesa chose to focus a little more on the gun side of things. This gunslinger is perfect for anyone who enjoys delivering punishment from afar. Charge up damage dealt to enemies into a single, powerful shot released on your command with Ballistic Battery while protecting yourself with Shatter Shield’s reflective damage barrier.

Teammates can take advantage of Shooting Gallery’s unique damage buff that jumps from player-to-player while causing nearby enemies’ weapons to jam.

Of course, if you’re tired of other Warframes challenging your gun-fu, then Peacemaker will show those pesky Boltor lovin Rhinos how it’s done. Drawing her Regulator pistols Mesa stands her ground, firing upon enemies as fast as you can pull the trigger. There’s just something satisfying about taking matters into your own hands.

Follow the trail of Infestation-riddled breadcrumbs as you attempt to track down Alad V amidst the chaos of his experiments running rampant. We’d call it a strategic, information-gathering espionage mission if it weren’t for all the screaming abominations trying to devour your flesh.

All jokes aside, Patient Zero is a great way to learn a little bit of lore as well as meet the new Mutalist enemies. Completing Patient Zero is also a requirement gaining the blueprint for the Mutalist Alad V Assassination Key, required to take on the big man himself. 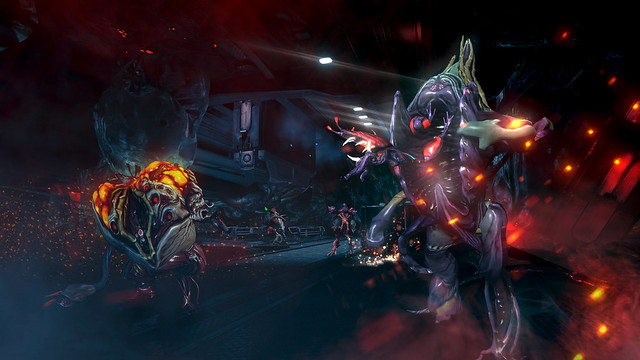 Alad V’s Mutalist creations are slowly creeping into the Solar System, each with their own unique contribution to the Infested cause. The Tar-Mutalist MOA and Swarm-Mutalist MOA both provide their own form of crowd control, respectively slowing Tenno with ranged goo-spit or blocking your vision with swarms of nanite clouds.

Bolstering Infested ranks are the Brood Mother and Boiler; one overwhelms enemies with waves of smaller Maggots while the other creates spawning pods that erupt into new enemies when hit. If it all sounds kind of disgusting, that’s because it is. More importantly than that, these new Infested should alter the way you approach the melee-oriented abominations. Keep your friends close, and some high powered weaponry even closer.

Even if you’re not fortunate enough to have your own set of Regulator pistols like Mesa there are still plenty of new toys to get excited about. The long-awaited gunblade, the Redeemer, lets players cut through the opposition with sweeping chops and the occasional shotgun blast.

That’s not to say we don’t have any new primary or sidearm weapons available. The Gammacor is the perfect weapon for any Tenno who thought using their hands to shoot concentrated laser beams was too much work. And anyone who enjoys Infested weaponry should find the Paracyst’s organic ordinance to be quite enjoyable; plus its secondary fire grappling hook is great for getting the upper hand on those heavy units that need the extra motivation to let you backstab them.

The Dual Decurion rounds off our “brand new weapon list” by giving Archwing players some high powered twin-pistol sidearms to tear through space with. If you’re in the mood for some heavier Archwing weaponry there’s also the enormous Rathbone hammer and the long-range Archwing railgun, Velocitus.

Joining these new weapons is a stance for the Redeemer, to help give those deadly swipes a bit of extra flair. Be sure to keep an eye out for the Redeemer Stance, High Noon, when killing Infested Brood Mothers during the event!

They may not be brand new, but these Syndicate weapons take a very cool twist on some existing tools of the Tenno trade. We know that you’re going to want to see which Syndicate offers which weapon ASAP, so to make things easier on you I’ve spent hours creating this in-depth bulleted list.

Phew! It’s important to know that each weapon has their own slight stat adjustment to better reflect the Syndicates unique tastes. Not only that, but Syndicate weapons are entirely tradeable with other Tenno provided you don’t rank up the weapon or use it in combat. 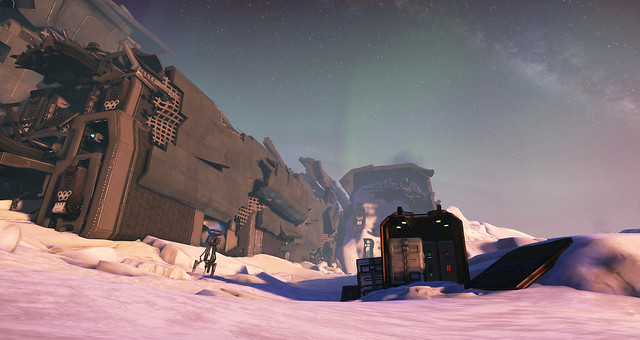 It made a brief appearance in Operation: Cryotic Front, but Eris’ Ice Planet tileset is finally back and here to stay. Between the icy caverns and natural snowdrifts the Ice Planet brings a serene backdrop to all the shooting that goes on in the Solar System. Not that you’ll be improving that by doing missions here, but hey at least you can admire that beautiful sunset while watching your enemy become devoured alive by a corrosive Miasma? 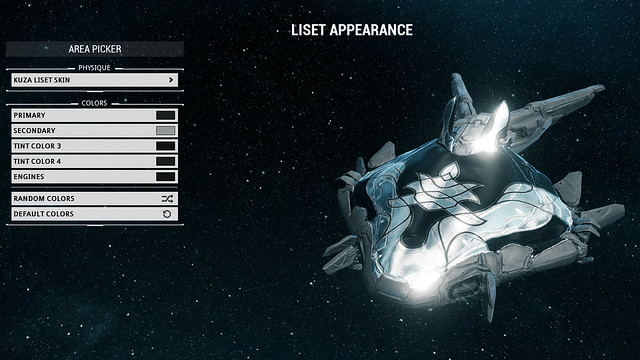 What good is being able to see the outside of your ship between missions if you can’t show off your stylish sense of fashion? Finally, you can show your allies and enemies the meaning of stealth while your hot pink Liset drops your yellow-and-purple space ninja deep into enemy territory undetected.

A flood of new enemies, weapons and a Warframe known for its deadly marksmanship — Mesa Update has a little bit of something for everybody. And, everyone here at Digital Extremes is excited to see Tenno rise up to challenge this new Infested threat. So enjoy the Mutalist Incursion while you can, I get the feeling that Alad V’s grand plans probably won’t stand up to the full might of space ninja vengeance.