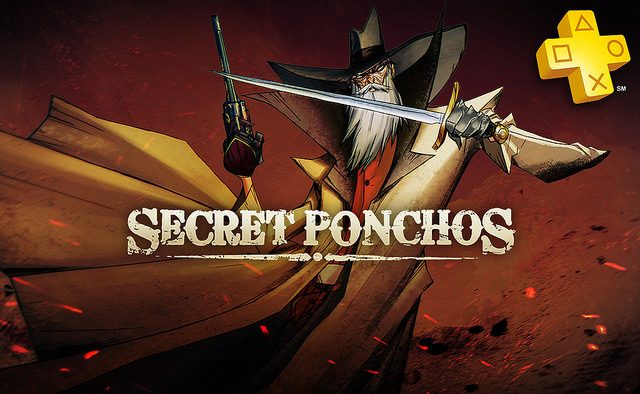 The weather is getting colder, which means two things: 1) It’s time for delicious food and 2) it’s time to hibernate with videogames. We’re here to help keep you gaming this winter with December’s free PlayStation Plus titles.

You can keep warm but stay social with Injustice: Gods Among Us Ultimate Edition, a fighting game that lets you finally figure out which DC heroes & villains would win in a fight, and Secret Ponchos, a wild west arcade-style duel where you’ll face off against friends or team up to take down other players.

Catch up on the Hitman series with Hitman HD Trilogy, which includes Hitman 2: Silent Assassins, Contracts and Blood Money, and experience the bizarre yet beloved Deadly Premonition: The Director’s Cut.

PS Vita owners get two Space Invaders-inspired games this month: Final Horizon and Titan Attacks. Fight off waves of space robots (they have spider tanks, gross) in tower defense title Final Horizon, or grab Titan Attacks!, which focuses on arcade-style gameplay but features some interesting elements that kick gameplay up a notch.

All of these games will be free for Plus members starting December 2nd. If you want to see these titles in action, check out the video below.

Free for PS Plus members
Injustice: Gods Among Us – Ultimate Edition enhances the bold new franchise to the fighting game genre from NetherRealm Studios. Featuring six new playable characters, over 30 new skins, and 60 new S.T.A.R. Labs missions, this edition packs a punch. In addition to DC Comics icons such as Batman, The Joker, Green Lantern, The Flash, Superman and Wonder Woman, the latest title from the award-winning studio presents a deep original story. Heroes and villains will engage in epic battles on a massive scale in a world where the line between good and evil has been blurred.

Free for PS Plus members
Set in a stylized and iconic Wild West, Secret Ponchos pits players against one another in this fast paced and innovative new form of online combat.

• Experience a completely unique combat style that thrives in a wide range of modes from intense 1vs1 stand-offs to chaotic 4vs4 all-out team battles
• Master dynamic outlaw archetypes, each possessing a variety of deadly attacks and unique weapons
• Compete against others using skill and precision timing: dive in and out of range, string together devastating combos and take cover to break line-of-site in order to regroup or plan an ambush

Free for PS Plus members
Revisit the mysterious town of Greenvale with Deadly Premonition: The Director’s Cut and discover more secrets, bask in the beauty with redefined graphics and move with greater freedom with a complete control overhaul.

Free for PS Plus members
Final Horizon takes you on an epic story across far reaching planets and solar systems as you fight the mysterious and deadly Swarm. Described as “2 minute tower defense”, Final Horizon is a new take on the popular strategy genre. Combining fast paced action and deep strategy, you’ll need to keep your wits about you if you want to survive.

Free for PS Plus members
Single-handedly turn back the evil invading Titan army! Drive back the aliens across the Solar System, and finally defeat them on their homeworld in this modern remix of classic arcade shoot ‘em ups. Titan Attacks! has the same easy-to-learn but hard-to-master gameplay of classic arcade shooters, but is packed full of new features, new strategies, and stylish neo-retro visuals.

What were your thoughts on November’s PlayStation Plus game lineup?