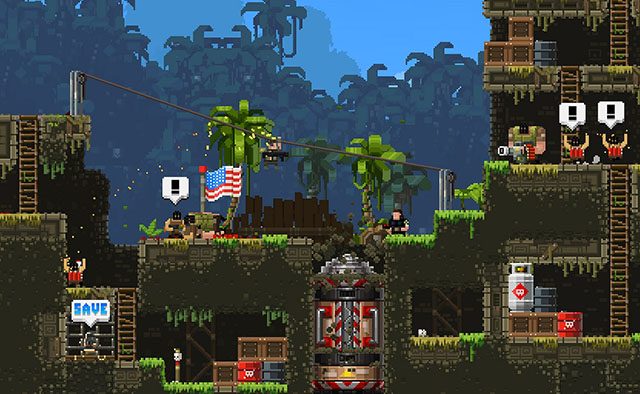 The Devolver Digital team is packing our best suits, most expensive hair gel, and the best PlayStation games ever in preparation for this year’s inaugural PlayStation Experience in Las Vegas! We can’t wait to share all the amazing games our beloved developers have been working on and hang out with the PlayStation community. Below is a look at the hotness we’ll be bringing to the party and the odds in Vegas of the game being awesome.

Unannounced (But Soon to Be Announced) Game

Let’s start things off with a little mystery, shall we? Devolver Digital and a wonderful new indie developer will be unveiling their studio and debut game at PlayStation Experience this year. While we can’t tell you much about it yet, we can say that it will be coming to PS4 and have the absolute cutest shotgun shells you’ve ever seen.

Las Vegas Odds on It Being Awesome: 2 to 1

The Talos Principle is a philosophical first-person puzzle game from Croteam, the creators of the legendary Serious Sam games, written by Tom Jubert (FTL, The Swapper) and Jonas Kyratzes (The Sea Will Claim Everything). As if awakening from a deep sleep, you find yourself in a strange, contradictory world of ancient ruins and advanced technology. Tasked by your creator with solving a series of increasingly complex puzzles, you must decide whether to have faith or to ask the difficult questions: Who are you? What is your purpose? And what are you going to do about it?

The Talos Principle will be playable on PS4 all weekend and will arrive via PlayStation Store in early 2015.

Las Vegas Odds on It Being Awesome: 1 to 1

The follow up to everyone’s favorite top-down kill ’em up, Hotline Miami 2: Wrong Number is set to release in early 2015 with more intense action and face melting music than your PS4 or PS Vita can be expected to handle.

Come on by the Devolver Digital booth to try your hand at the latest demo and prepare yourself for the pain of repeated failure. And grab the original Hotline Miami on PS4, PS3, and PS Vita to see what all the fuss is about.

BROOOOOOOFOOOOOOORCE! Come Bro-down at the Devolver Digital booth with the most explosioniest game at PlayStation Experience. Brace your loins with up to four players to run ‘n’ gun as dozens of different bros and eliminate the opposing terrorist forces that threaten our way of life. Unleash scores of unique weapons and set off incredible chain reactions of fire, napalm, and limbs in the name of freedom.

Broforce will be playable on PS4 all weekend so bring your bros and prep for the game’s launch on PS4 in 2015!

Las Vegas Odds on It Being Awesome: BRO to 1

Combine the brute force of overwhelming firepower with the elegant precision of a katana to annihilate the merciless armies of the shadow realm in an exhilarating and visually stunning transformation of the classic first-person shooter. Shadow Warrior is available now on PS4.

Those lovable scamps at Roll7 — the developer behind OlliOlli — are finishing up work on their not really politically charged, cover-based shooter Not A Hero for PS4 and PS Vita. But you can get your dirty little hands on it first at PlayStation Experience and then go back home and brag to your friends.

But seriously, you’ll be choosing between a few totally unique heroes to help clean up the city in an absurdly violent way all so an anthropomorphic rabbit from the future can win an election to become mayor. There are ninjas, and helicopters, and birds with explosives strapped to their back.

Las Vegas Odds on It Being Awesome: ALL BETS ARE OFF

Between our world and the world beyond lie the Titan Souls, the spiritual source and sum of all living things. Now scattered amongst the ruins and guarded by the idle titans charged with their care, a solitary hero armed with but a single arrow is once again assembling shards of the Titan Soul in a quest for truth and power.

But all that fancy marketing language won’t matter when you have some colossal monster bringing hell down on you as you frantically aim your single, solitary arrow at its one weak spot.

Titan Souls will be drinking your tears on PS4 during the whole event and, if you can stomach the fight, will be out on PS4 and PS Vita early next year.

Las Vegas Odds on It Being Awesome: 1 to 1