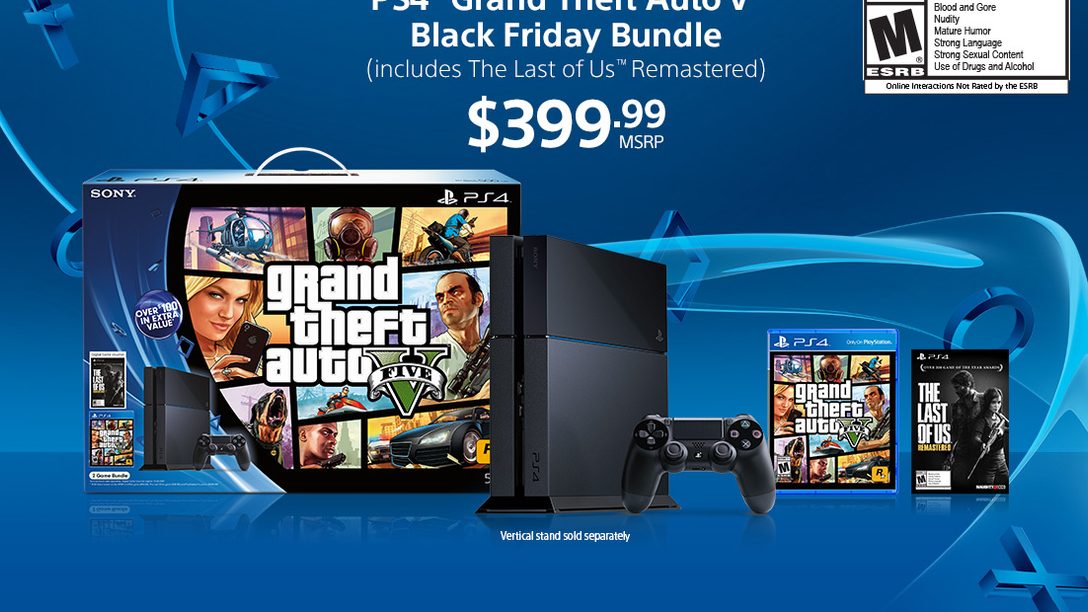 Thanksgiving is right around the corner, and with it comes the excitement of impending Black Friday deals on the hottest gifts of the holiday season. Ever since its launch one year ago, PlayStation 4 has been the number one console, and today I’m pleased to officially announce two Black Friday PS4 bundles featuring some of the biggest games of the year for gamers in the United States and Canada.

The first bundle is the Grand Theft Auto V PS4 Black Friday Bundle featuring a 500GB PS4 and a copy of Grand Theft Auto V, as well as a digital download voucher for The Last of Us Remastered — all for just $399.99 USD/$449.99 CAD. Get a brand new PS4 just in time for the holidays with this epic bundle!

Good news for all those who have already spent countless hours exploring everything Grand Theft Auto Online has to offer on PS3 or Xbox 360 — with Grand Theft Auto V on PS4, you can transfer your existing GTA Online characters and progress to your PS4 so you don’t have to start over. And if you are making your return to Los Santos and Blaine County on PS4, you’ll also get access to exclusive vehicles, weapons, collectibles and more.

This bundle also provides the perfect opportunity to play The Last of Us Remastered — the definitive version of the game that won over 200 game of the year awards — featuring enhanced visuals and loads of additional content.

Our second Black Friday bundle features a 500GB PS4, LEGO Batman 3: Beyond Gotham and LittleBigPlanet 3 — all for just $399.99 USD/$449.99 CAD. Pack your space suit and join LEGO Batman on an out-of-this-world adventure as the Caped Crusader joins forces with the super heroes of the DC Comics Universe and blasts off to outer space to stop the evil Brainiac from destroying Earth. And in LittleBigPlanet 3, you can explore a world filled with limitless imagination as Sackboy and his new cast of friends — OddSock, Swoop and Toggle.

Make sure you mark your calendars for Black Friday, because these bundles won’t last long. Check your local retailer and pick them up while supplies last to get the ultimate deal on PS4!