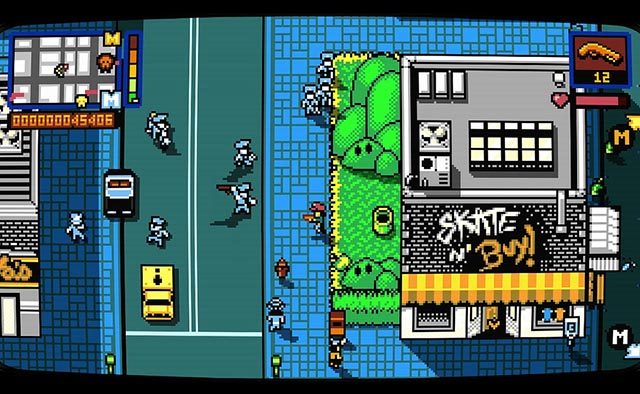 Tomorrow, the open-world nostalgia trip that is Retro City Rampage: DX hits PS4, PS3 and PS Vita digitally with 3X Cross Buy. With a 20% off PlayStation Plus launch week discount, you’ll get all three for $7.99 ($9.99 without Plus). That’s almost half of the original’s $14.99 launch price and with an added platform.

Even more, this time digital isn’t your only option. ‘DX’ is getting a limited edition PS4 retail disc release too!

The retail edition will include the PS4 game, the digital soundtrack and a few more digital freebies for only $25. Limited to 2,000 units, this is the rarest PS4 game ever produced. Seeing as the limited edition Vinyl soundtrack sold out long ago, I strongly recommend pre-ordering. It’s sold exclusively online via the Vblank Fangamer Store. and available for pre-order now.

This special retail version also includes a double sided reversible cover, giving a nod to the video rental store cases of the ’80s. Anyone remember those?!

It’s set to ship between the end of this month and early next month. You should have no problem getting it in time for the holidays.

Producing physical copies is something I’ve wanted to do for a long time, and something you’ve all been requesting since before the game was even released. While PC was always a finger’s reach away, to me, nothing would be quite the trophy that a freshly pressed, shrink wrapped console game would be.

Not only has Sony been fantastic in allowing indies to self-publish — since long before it made the news — they don’t limit us to just downloadable games. When they said self-publish, they meant it. Even this one-man-shop was able to self-publish and self-fund a full blown retail version!

For months, I debated as to which platform to print physical copies for, but ultimately Sony made my decision easy once I discovered how they’d streamlined the PS4 process. In the past, you would need to build separate versions of a game for digital and retail and send both into certification. Now with PS4, one single submission can be deployed to both. It cuts down on both the work and time, making something cool like this even more within reach. By selling the retail version exclusively online, it also simplified distribution. All in all, going retail turned out to be even less work than I’d anticipated. It’s truly a great time to be an indie.

In case you missed it, for the full rundown on what’s new in the DX version, check out last week’s blog.

Pre-order the PS4 retail version at the Vblank Fangamer Store.

Owners of the original Retro City Rampage for PS3 and PS Vita can transfer their save games to the new DX version via Cross-Save. The new DX version is a separate purchase, but keep in mind that with DX, you’re getting the PS4 version, a brand new Trophy set and new leaderboards. Owners of the original RCR who transfer their save game to ‘DX’ will also earn a shiny star next to their score on the leaderboards.