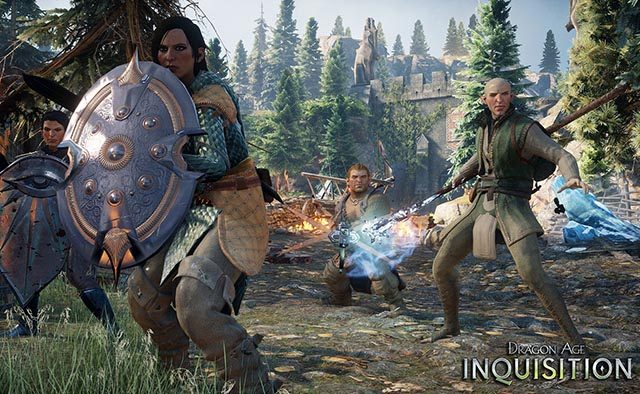 Dragon Age: Inquisition, the latest chapter in BioWare’s sweeping fantasy saga, wastes no time beginning its urgent, world-splitting story. Truth be told, the developers have sewn a great amount of detail onto the main menu alone. Starting a new game catapults the idyllic scene of a snowy peace summit into utter devastation. And that’s just the menu.

For those who have followed previous chapters of Dragon Age, the story is dense and rich with lore. But when a seething, green portal opens in our world and welcomes in legions of demons, players have a straightforward cause to rally behind.

In Dragon Age: Inquisition, players follow the story of a survivor that emerges from this demonic blast (almost) unscathed. The site of the explosion had been host to a peace summit organized by Divine Justinia, who sought an end to the strife between mages and Templars. With those plans wholly awry, the main character — the Inquisitor — is tasked with upholding Justinia’s legacy and hunting down the demonic agents haunting the realm.

Despite the gravity of the situation and the massive cast of characters, Inquisition outlines clear goals and motives for all. It helps newcomers acclimate to the world, and learn about the warring powers over time. A thick codex also documents characters, locations, and legends for those who want to dive deeper into the lore of the Dragon Age universe.

In true BioWare form, Inquisition’s branching dialogue system lets players choose whether they want to wander into enriching conversations or cut the chatter short and get back to the action. How the player handles these situations will define not only the main character, but also that character’s relationship to his or her followers.

Battles in Inquisition place players in control of one character at a time. But they can switch to any hero in the party at will, issuing commands via a strategic, top-down view, and managing as much or as little as needed. Hit the touch pad, for example, and survey the surrounding terrain to organize attacks, assign spells, and send in melee heroes to begin the assault. Or command followers to stay behind while the Inquisitor stealthily approaches the opposition and takes down any unfortunate stragglers.

This system instills a tremendous amount of choice in players, outside of selecting the sex, race, and class of the hero. Organizing party strategies and then defeating foes on the field can involve moment-to-moment decision making, or a more casual approach for the less patient. Difficulty can be adjusted dynamically to accommodate more demanding players.

Inquisition ties three followers to the main hero in less than an hour, giving players control of a full party before the world has even opened up with its packed docket of quests. Strolling through wintery peaks and forests will quickly introduce players to villagers that need help, have requests, or are just victims of the wars raging throughout the realm. These quests can be undertaken or ignored at a player’s leisure, which again, highlights player choice and the freedom for newcomers to skim the shallows or dive deep into the content offered.

Outside of questing, one of the most enthralling aspects of Inquisition is just that: the Inquisition. Building an army, equipping it, and customizing strongholds showers players with options, breathing a sense of ownership into the conflict that makes every battle more personal. And when that customization extends from the hero herself to the whole damn Inquisition, players will feel a real connection with the struggle of Dragon Age: Inquisition — newcomers and veterans alike.