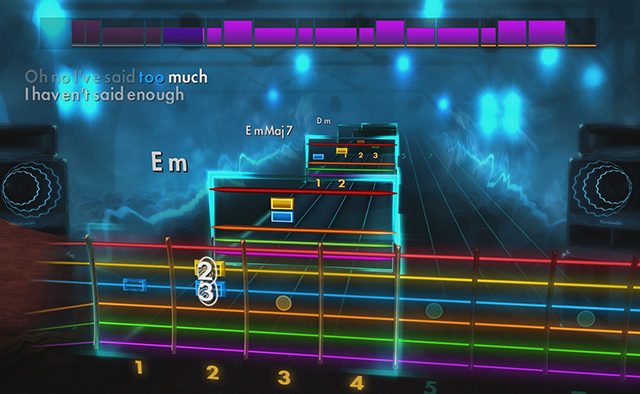 Playing a musical instrument is a lifelong journey. No matter when you start, you’re never really done — there’s always something new to learn. So if you started learning how to play guitar or bass on PS3 with Rocksmith or Rocksmith 2014, it’s only natural that you’d want to continue on your PS4. Well, here’s good news: as of today, you’ll be able to pick up Rocksmith 2014 on PS4 — and if you do, a dozen Jimi Hendrix songs are headed your way next month, for free.

The PS4 version of Rocksmith 2014 Edition contains all the content of its predecessor; nothing has been removed in the transition to the latest hardware. You’ll get 55 songs from bands like Arctic Monkeys, Muse, Boston, Slayer, Foo Fighters, and Aerosmith (just to name a handful), plus interactive lessons that cover everything from how to tune and change your guitar strings up through complex chords, pinch harmonics, and two-hand tapping.

Beyond the song library, Rocksmith 2014 offers Guitarcade mode, a retro-style mini-game collection that makes you forget you’re actually building valuable skills; Session Mode, which encourages you to stretch out and improvise with a customizable backing band that follows your direction; and a detailed Tone Designer, a sonic playground of amps and effects where you can dial in the exact sounds you hear in your head. Whether you’ve never picked up a guitar or bass before or you’re a seasoned musician looking for fresh inspiration, Rocksmith 2014 offers a complete package.

You’ll find some PS4-specific perks, too. The visuals are now 1080p native, so the note highways and detailed lesson videos will look better than ever before. Thanks to the PS4’s built-in Share functionality, you’ll be able to stream your Session Mode jams or Guitarcade playthroughs directly to Twitch with the touch of a button. And if you’re a PlayStation Vita owner, you can use Remote Play to send Rocksmith 2014 to your portable screen and practice even when you’re not plugged in.

If you are one of those returning players I mentioned at the start, here’s great news: any DLC songs you’ve purchased on your PS3 will be downloadable on PS4 at no additional cost. That includes the DLC songs that came out for the original Rocksmith back in 2011! (Patience, though — since we’re talking about several hundred songs, we expect them to become available by the end of the year).

Plus, anyone who picks up the PS4 edition before January 31st, 2015 will be able to download a dozen songs by guitar legend Jimi Hendrix absolutely free. These songs won’t be released until December 16th, but when they’re released, all PS4 owners can download them at no cost:

The Jimi Hendrix 12-song pack would normally cost $29.99 — and it will, after January 31st — so make sure you download them on PS4 from the in-game Shop menu item during that magic freebie period starting mid-December. They’ll keep you challenged!

If learning to play guitar or bass is one of your lifelong goals, Rocksmith 2014 might be the way to finally achieve it. Through Rocksmith 2014, we’ve seen people learn to play in just 60 days — and you might be surprised at what you can do, too.