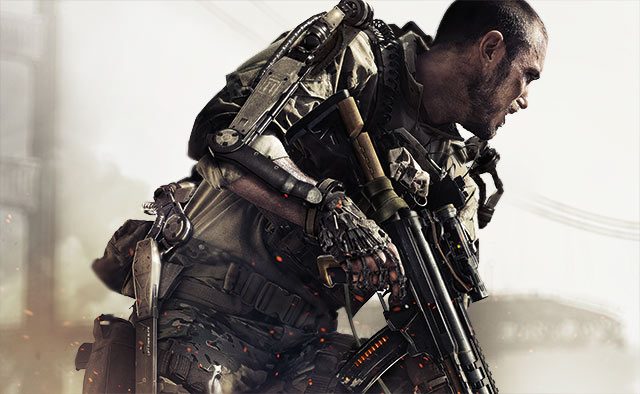 Steel yourself, people. It’s a huge week for gaming as Call of Duty: Advanced Warfare launches on PS4 and PS3. And that’s just the start for this week’s colossal lineup.

Continuing a long line of world-renowned shooters, Call of Duty: Advanced Warfare drops this week and brings the future of combat to PS4 and PS3. Use bleeding-edge technology and tactics to dominate the battlefield in jaw-dropping firefights. Navigate difficult terrain in a heartbeat. Deploy futuristic weapons to even the odds. And face the world in heart-pumping multiplayer.

If shooters aren’t your scene, no worries: The Binding of Isaac: Rebirth is dragging its twisting mishmash of shocking visuals and punishing challenges to PS4 and Vita.

The Binding of Isaac: Rebirth
PS4, PS Vita — Digital
The Binding of Isaac is a randomly generated action RPG shooter with heavy Rogue-like elements. Following Isaac on his journey, players will find bizarre treasures that change Isaac’s form giving him superhuman abilities and enabling him to fight off droves of mysterious creatures, discover secrets, and fight his way to safety.
BlazeRush
PS3 — Digital
BlazeRush is a dynamic arcade racing survival game with no health, no leveling, and no brakes. You can assemble a team of friends to play in local or online multiplayer, choose a car to your taste and chase, blow up, and cut off! Adapt your style and tactics to new enemies, obstacles and tracks.
Call of Duty: Advanced Warfare
PS4, PS3 — Digital, Retail
Call of Duty: Advanced Warfare envisions the powerful battlegrounds of the future, where both technology and tactic have evolved to usher in a new era of combat. Delivering a stunning performance, Academy Award winning actor Kevin Spacey stars as Jonathan Irons — one of the most powerful men in the world — shaping this chilling vision of the future of war.
Disney Infinity (2.0 Edition)
PS4, PS3 — Digital (Already at Retail)
Play with some of your favorite Disney and Pixar worlds like never before. Experience adventures in the worlds of Pirates of the Caribbean, The Incredibles, and Monsters University. Battle enemies, solve puzzles, overcome obstacles, and complete a variety of other unique quests.
Don’t Die, Mr. Robot!
PS Vita — Digital
It’s Don’t Die, Mr. Robot! The cute, colorful and blissfully frantic action game that arcade fans have been waiting for all their lives. Mr. Robot loves fruit! But whenever he tries to eat one, it explodes. It’s not all bad, though! Those explosions destroy the endless horde of robotic machines trying to squish, zap, stomp and bite him.
Frozen Synapse Prime
PS3 — Digital
Take on the role of Tactics, leading a small rebel faction to overthrow a powerful corporation controlling the city of Markov Geist. Control an elite strike team of futuristic soldiers from shotgunners and snipers, to grenadiers and machine-gunners in the ultimate turn-based strategy game.
Home
PS Vita — Digital (Cross Buy with PS4)
Home is a player-driven story that responds to your choices; taking cues from adventure games as well as side-scrollers, what happens in Home is entirely up to the player. As you make choices and even explore, the game changes in subtle ways to reflect your adventure.
How to Survive: Storm Warning Edition
PS4 — Digital
In How to Survive, your worst enemy is yourself! You will have to fulfill your basic needs of food, water, and shelter while facing all sorts of natural and unnatural threats. So be prepared to find zombies, armored zombies, electric zombies, giants, but also piranha, crocodiles, bears, iguanas… and many more surprises.
The Hungry Horde
PS Vita — Digital
Lead a horde of zombies on a manic mission to expand the ranks of the undead and destroy humanity. Battle the clock and attempt to trash the planet in this highly addictive, run-till-you-die zombie rampage.
MotoGP 14
PS4, PS3, PS Vita — Digital (PS4, PS3 at Retail)
Race on all the official tracks and take on your adversaries on the brand new Argentina circuit. Put yourself to the test with new game modes, including online Split Battle and offline Real Events 2013, not forgetting the compelling career mode. MotoGP 14 has been completely overhauled thanks to the new graphics engine that gives players the opportunity of experiencing all the thrills of being a real MotoGP rider.
Rocksmith 2014
PS4 — Digital, Retail
Rocksmith 2014 Edition is bigger, better, and faster than ever. Rebuilt from the ground-up, you’ll experience vastly improved features, a new look, more flexible and deeper practice tools, new techniques and tunings, over 50 new hit songs, and much more.
Snark Busters: High Society
PS3 — Digital
Test your wits with mind bending puzzles and extreme hidden object fun in Snark Busters: High Society. Solve a devious crime, one that has been pinned on an innocent person. Let your inner detective out, and save the day. You will be tasked with solving challenging puzzles that would leave anyone else scratching their head.
The Walking Dead: The Complete Second Season
PS Vita — Retail (Already Digital)
The sequel to the critically-acclaimed series continues several months after the events seen in Season One, as Clementine is searching for safety. But what can an ordinary child do to stay alive when the living can be just as bad — and sometimes worse — than the dead?
The Wolf Among Us
PS4, PS3, PS Vita — Digital, Retail
Fairytale characters are being murdered in this hard-boiled, violent and mature thriller based on the award-winning Fables comic book series by Bill Willingham. As Bigby Wolf — THE big bad wolf — you will discover that a brutal, bloody murder is just a taste of things to come in a game series where your every decision can have enormous consequences.