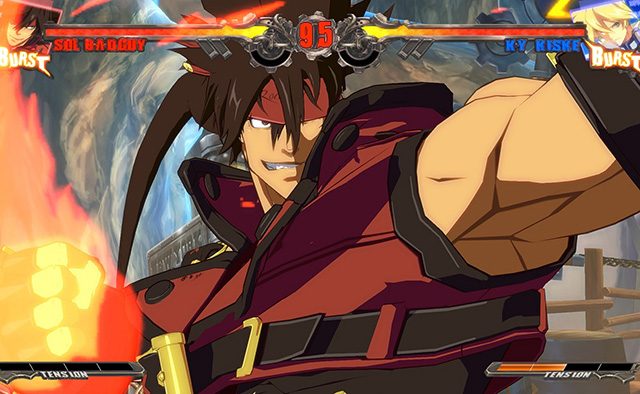 Hello friend and lovers of all things Aksys! It is your loyal and humble servant, Frank “Bo” deWindt II, Director of Production here at Aksys Games.

Today I bring to you joyous and momentous news in regards to our upcoming fighting game on PS4 and PS3, Guilty Gear Xrd -SIGN-. But first, let me explain a little bit about the game for those that have no prior knowledge of the Guilty Gear series!

The series has been around since time immemorial (and by that, I mean for 16 years!). It’s been redesigned from the world of 2D, to incorporate both 2D and 3D elements, making it a veritable feast for the eyes kind of experience, thanks to some technical Arc System Works magic and the Unreal 3 engine. Thanks to that, 3D models have been fashioned to create the illusion of 2D sprites without anyone being the wiser.

Guilty Gear Xrd -SIGN- has also enhanced its fighting mechanics and has significantly expanded upon one of the series’ long standing mechanics, the Roman Cancel! Thanks to that, players will be able to have a myriad of vast fighting styles at their command.

The character roster also has a lot of familiar faces, from the widely known Sol Badguy and Ky Kiske, two beacons of the Guilty Gear franchise, all the way to someone as cute and adorable as the Jellyfish pirate, May!

Some of the newer characters include the unique and cunning, Bedman, who, like his namesake, is attached to and fights using nothing else but… A BED! And of course the monotone and lovely Ramlethal Valentine, whose swords, if used correctly, can really dish out some punishment on your opponent.

Recently two more characters have been announced, Sin Kiske, who employs the power of lightning as well as a flag to battle his foes, and the lovely and pure Elphelt! But beware of her arsenal of guns! She’ll give a whole new meaning to the term, “Shotgun Wedding”. She will be a DLC character, just for the curious among you.

This brings the current roster to a grand total of 16! Plenty of options to choose from to find the character the best suits you!

Now that I’ve given a little bit of exposition on the game, I probably should keep the rest of my informational cards up my sleeve, but before I go, I need to tell everyone the big news!

A release date for Guilty Gear Xrd -SIGN- in the US has finally been decided! It will be…

So now that everyone is informed, make sure to go out and pre-order it as soon as you can! Speaking of pre-orders, there will be both limited and standard editions of the game on both PS4 and PS3!

The limited edition will contain a box to hold all the goodies, fashioned in the likeness of the “Backyard”, the Guilty Gear Xrd -SIGN- Vocal Collection (just like the Japanese version!), the Guilty Gear Xrd -SIGN- Character Book which will provide information on characters, terms, and concepts from the beginning of the series to the present, and finally, the Sol Badguy “FREE” belt buckle keychain!

That LE sounds “Fireseal” hot! I would totally pre-order it ASAP if I didn’t work here already!

So with all that info swirling in your heads, just remember, Guilty Gear Xrd -SIGN- releases December 16, 2014! So pre-order away!

And don’t forget the four magic words… Get ready to ROCK! This is Bo, signing off!