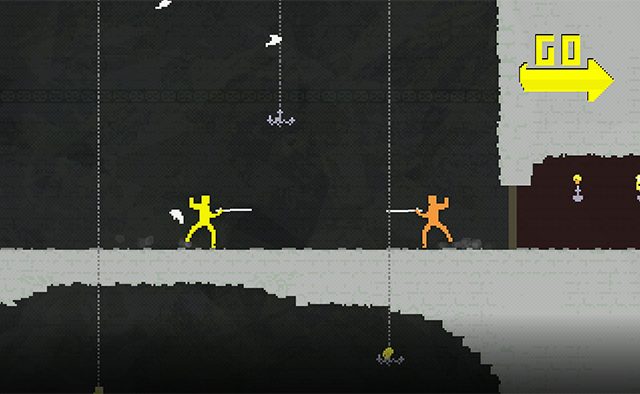 Today is the day, friends! Nidhogg is out on PS4, Vita, and Playstation TV! If you haven’t played it already, its a crazy fun two-player fencing-fighting game great for parties and awesome for online and offline play at home. The launch price is $14.99, and for PS Plus members, it’s on sale for $11.99 until October 28th.

The best part is that Nidhogg features cross-buy and cross-play; meaning, if you own one, you own them all, and you can play across platforms! If you prefer playing with your friends in person, you can throw a Nidhogg party, since there is a built in tournament mode for three to eight people.

You can play in single-player mode against AI opponents, or you can connect to PSN over wifi and play against other players, whether they’re on a Vita, PS4, or PlayStation TV! You can even play online across systems, such as: Vita vs PS4, Vita vs PlayStationTV, or PS4 vs PSTV. If you’re out of wifi range and you just want to play someone on the bus, or on a long car trip with two Vitas, you can do that in Vita to Vita ad-hoc mode. If you just have one Vita and two people, you can still play! The left stick controls one player and the right stick controls the other!

We hope you are as excited to play Nidhogg as we are in bringing it to you — en garde!