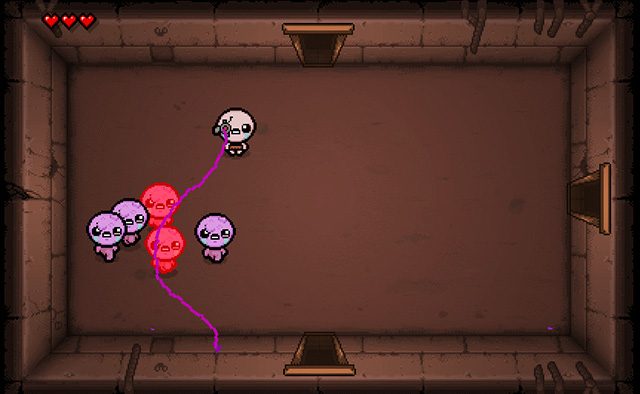 If you’re not familiar with The Binding of Isaac, it combines elements of The Legend of Zelda and Smash TV with the roguelike genre. The Binding of Isaac: Rebirth literally features hundreds of items, weapons and power-ups all wrapped-up in an arcade-like experience. The game is designed by this guy:

And he said, “it’ll be awesome to finally give console players a chance to experience the weirdest thing I’ve ever made.” I’ve been working with him for two years and have to agree.   OK, so let’s get into it.

The Binding of Isaac: Rebirth features over 500 hours of gameplay (not marketing fluff, it’ll take you at least this long to unlock all the secrets in the game). Each run will be different because the enemies, rooms, levels and drops are all randomly generated. Every time you beat the game or die and start a new game it’ll be all-new and fresh.

Along the way you’re going to find over 450 items/weapons/power-ups and general pick-ups that affect Isaac in various ways.

The Binding of Isaac: Rebirth features over 50 bosses, including a whole bunch of new ones as well as retunes on previous bosses. What we’ve done with the bosses is give them more variety and create boss behaviors versus patterns. What that means is that although bosses will behave a certain way, we’ve added a layer of complexity that will make them more fun to fight and kill!

The Binding of Isaac: Rebirth has a unique weapon combo system. When you pick up a weapon upgrade, then another and another, it’s not unlikely that the various attributes of those weapons will merge and modify to create a new (hopefully) better weapon.

Have a look below:

Anyone who’s played the classic vertical shooter Raiden may be familiar with this kind of weapon. In The Binding of Isaac: Rebirth, your weapons will stack. To get this fancy homing laser you need to find Technology, which is the laser and then also find Spoon Bender. The latter weapon lets certain others defy the laws of physics and home in on multiple enemies. AWESOME.

And here’s Ludovic with Brimstone:

If you’re old enough to enlist in the military, then you may want to watch this. Be warned, it’s not for everywhere and probably not work-safe. You have been warned!

By the way, I’m here for you! I’m open to questions, suggestions and general feedback; let me know if you’d like to see more posts related to The Binding of Isaac: Rebirth here and we’ll break away more of the mystery.

Got questions? Hit me up via the comments below.