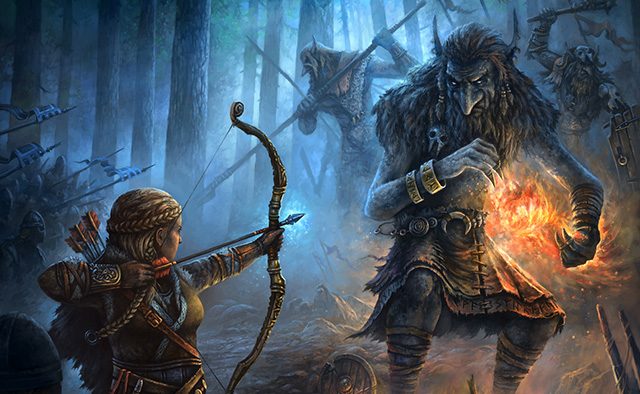 Some pretty exciting news coming out of Gamescom this week! We at Paradox Interactive and Paradox Development Studios are bringing our upcoming role-playing game Runemaster to PS4.

There are a lot of ‘firsts’ to note here. This is the first role-playing game developed entirely by Paradox Development Studio, a group best known for its deep historical strategy games, like Crusader Kings II and Europa Universalis IV. It’s also the first time that a Paradox developed title will be designed with both PCs and a current generation console in mind. Paradox Interactive has already announced that Magicka 2 will be coming to PS4, so 2015 will be an exciting year for Paradox and Sony.

What is Runemaster? As befits a Swedish developer, Runemaster is a fantasy role-playing game set in the exciting and darkly tragic world of Norse myth. Drawing on Viking sagas and the Eddas of Viking bards, Runemaster tosses the player into the chaotic worlds of legend — Midgard, Jotunheim, Niflheim, and so on — as the universe threatens to come to an end. Ragnarok could be coming and the player can choose to prevent this world-smashing cataclysm or to hasten it, bringing with it a new age.

With six unique worlds to explore, six races to choose from and a male or female choice in each instance, the options already seem enormous. But we’ve gone a few steps further – each race will have unique quests in a randomly generated world so that a Dwarven berserker and Human skald will play two entirely different games. Replaybility is a core value for us at Paradox; the best games are those that you can revisit time and time again.

Norse mythology is at once tragic and comedic. Though it all bends towards an inevitably sad conclusion and the end of times, episodes within the grand narrative of Norse legend have pranks, mistaken identities and trickster figures. Our quests will try to walk that same balance of light-hearted antic colored by deadly rivalries and the recognition that the universe is often unfriendly and unresponsive to mortal demands.

Beyond the quests and exploration, we also have a tactical battle map for your battles where your hero or heroine will lead an army against enemy troops, including giants (or just giant wildlife)! As your army gains experience in battle, you can outfit it with squads with banners to enhance their abilities, while your hero may win magic weapons and items to help in future encounters.

Paradox is very happy to be partnered with PlayStation for some of our upcoming titles, and we’re really proud of how Runemaster is shaping up. Runemaster is a special title for us as we try some new things. It will be coming to PS4 in 2015, and we hope you will follow our progress in the coming months.