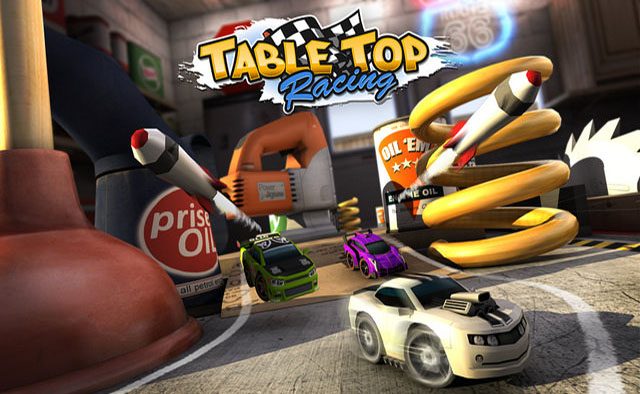 I was part of the original team that created WipeOut back in the mid ’90s for PlayStation, and I have always loved combat racers and driving games above all other genres — games like Micro Machines and Mario Kart. So when we were looking at building a new racer, it felt natural to reference those classics when crafting Table Top Racing. We set out to capture some of that essence of what made them so much fun, and I think we’ve done a pretty good job on that front!

Table Top Racing features a host of crazy tracks complete with shortcuts, over-sized obstacles, jumps, and all manner of other hazards. As the game picks up speed, you need to understand the best racing lines and drift momentum you can get with some of the later cars — it’s pretty frantic.

We’ve included one shot weapon power-ups which give players a temporary advantage, be it a speed boost, missile launch, EMP strike, or dropping a bomb out the back for someone else to drive into. We think you’ll find some cool ways to seize the advantage to win races!

Some of you may have already heard of Table Top Racing as it’s available on mobile devices. The biggest improvement that PS Vita has enabled us to make is the addition of a controllable accelerator and brake. PS Vita has really opened up what we can do with this game and we fully believe Table Top Racing PS Vita is the most pure and fun version of the game we’ve ever made.

On top of the better controls, PS Vita technology has allowed us to include the new “Rear View” glance-back by touching the rear panel. We also re-created all the race tracks with twice as many polygons — meaning it looks awesome and still runs buttery smooth. The PS Vita has shown itself to be a handheld powerhouse.

With the four-player multiplayer feature, you also have the ability to play against four of your friends in both ad-hoc mode or via PSN, not many PS Vita titles do both. Ad-hoc mode helps re-capture that Micro Machines social and intensely competitive experience which I was so keen to recreate.

Back in the day, me and my mates would huddle round a PlayStation playing Micro Machines all vying for victory. The banter and torment was just brilliant! We used to have sessions that went on until 4 AM and still end up with no clear winner. I really think we’ve managed to capture some of that fun with Table Top Racing on PS Vita, particularly with Ad-hoc mode.

We’re really happy with the PS Vita version — its great fun, highly competitive, and pretty brutal sometimes. We’re looking forward to hearing what you think, so leave your comments below.