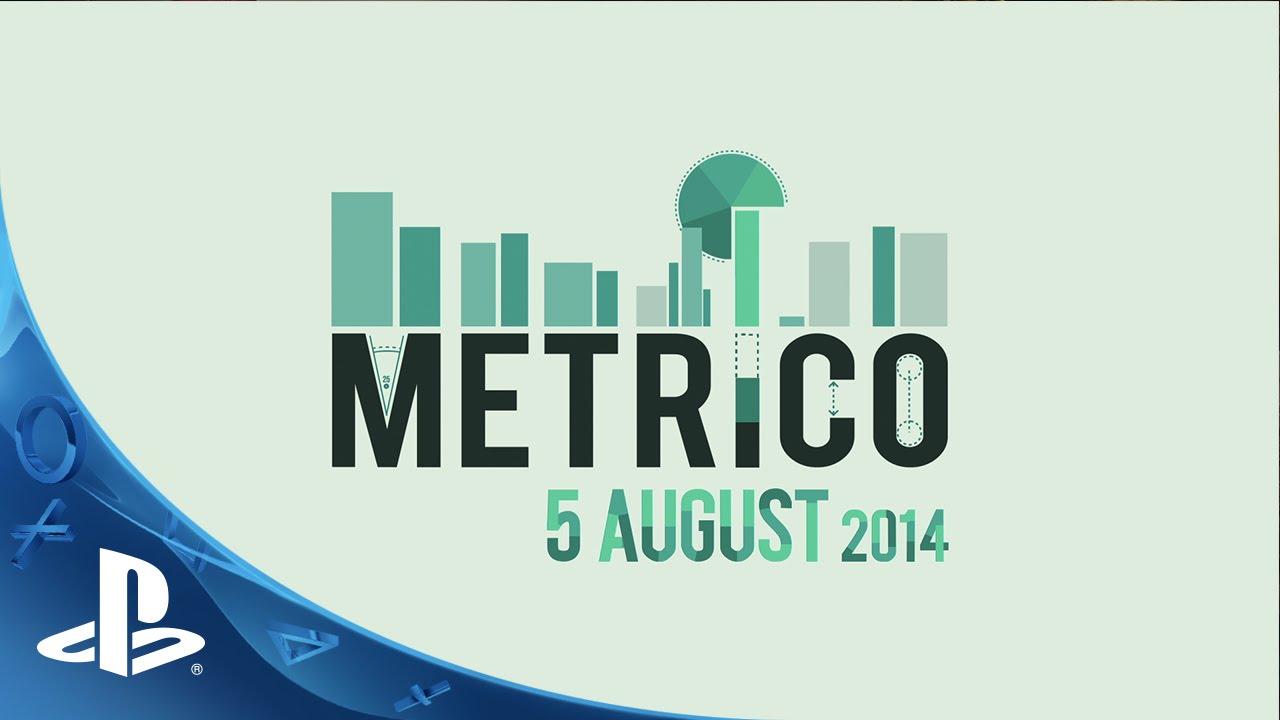 Hi fellow PlayStation enthusiasts! We’re finally ramping up to the release of our first big title, the infographics action game Metrico. We got loads of questions during development, which we are really excited to finally answer in this blog post!

One of the most frequently asked question is; when is Metrico coming out? We’re proud to announce that Metrico will be available on PlayStation Network August 5th in the US, exclusively on PS Vita!

The main reason we took such a long time to show gameplay footage is because we always felt the main mechanics of Metrico are quite tricky to explain through video. We never got around to solving this, even though this is probably a recurring issue for novel game concepts. We tried to explain the ‘Input Morphing’ mechanic in a blog post before, but it explains itself best when you play Metrico yourself. Those of you who already played Metrico will hopefully agree on this.

We tried to create a clarifying gameplay trailer using several different approaches, but it was hard and it took a lot of time, so we chose instead to invest that time to work on the game. In the end, actually playing the game, experimenting with all the different forms of inputs and getting direct feedback through playing is absolutely the single best way to understand Metrico.

Therefore we also decided to offer a sneak peek into the world of Metrico for everybody: A free demo will be available when Metrico releases. This demo consists of the entire first world. In terms of gameplay time, the first world is about 5% of the entire game. Please note that this world merely touches the surface of what we’re trying to do with Metrico. More inputs will be added in every world as complexity and difficulty increase. We sincerely hope you enjoy the demo and if you’re up for much more exploration and mindbenders, it will only be a few inputs away.

Palmbomen is a talented Dutch synth composer based in LA. This friend of the studio released several albums, and since we were already big fans of his work we were thrilled he liked the idea of Metrico — so much, in fact, that he wanted to work with us to create the game’s audio. Palmbomen (Dutch for ‘palm trees’) created an enchanting soundtrack, along with all the sound effects fitting the Metrico atmosphere in a way he only can.

Music is very important to us, and we’re very proud of the way his music is implemented into Metrico. Over the years, Palmbomen developed an interest in having new ways for people to experience his music. The game acts as a ‘sequencer’, reacting to what the player does. This way all layers of music (bass, percussion, melody, etc.) are triggered by the way the player traverses Metrico. This way the music helps to creating a coherent experience with a nice atmosphere.

Each world is a unique music track. The different hypnotic synth sound effects and psychedelic music he created accompanying each world tie in to the unique aesthetics and gameplay very well. It’s been a close — and truly great — collaboration.

Palmbomen’s song Stock was already featured in GTA V. We encourage you to check out his work on Soundcloud or Spotify!

The release is only a few weeks from now, which feels very exciting, scary and surreal to us. The project we’ve been putting our love in for such a long time has finally come to an end. Metrico is out of our hands and is going through Sony’s quality assurance as we speak. We started fulltime development on Metrico nearly two years ago, so it has been a huge and important part of our lives. Making our first console game, effectively as a three guy studio, was a lot of fun, but also a lot of work. It was a very ambitious project and therefore a lot more work than we anticipated, which I guess is quite common in game development. We’re very glad we got help from talented interns and freelancers along the way. We couldn’t have done it without them!

It’s been a crazy ride for us. We laughed and cried; saw relationsihps begin and end; travelled the world for events; received invaluable feedback from testers; saw joy and frustration in players’ eyes; met countless great games industry people along the way; moved in and out of offices; crunched with every deadline, and now we can’t wait until it goes live.

But the 5th of August will only be the beginning. We created a world for you to play in and we can’t wait to have players explore it and hear what all of you think about Metrico! Now, it’s time for your input. Let us know what you think in the comments, or follow Metrico for more art and trailers on Facebook or Twitter!