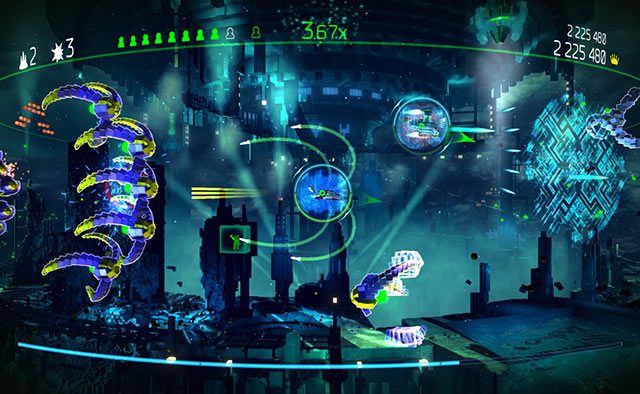 What up PlayStation Nation! Ian Pickles, Producer at XDEV Studio Europe here with some news regarding the new Resogun update, which will be hitting your PS4 before the end of this weekend.

This update, which is free to all owners of Resogun, lays the ground work for the forthcoming Heroes expansion due next week, which will expand your Resogun experience with new modes, game worlds and more.

In addition to getting you ready for Heroes, we wanted to give everyone something extra to thank you for the amazing support and reception you’ve shown Resogun since release. The guys at Housemarque and us here at XDEV Studio Europe were amazed by the reaction to the game — thank you all so much for getting behind the game.

With that in mind, alongside lots of tweaks, improvements and bug fixes, this free update contains a few special treats from us:

One of the more requested features we’ve seen since the world got a look at “dem voxels” is the ability to create your own ship. Housemarque listened and created a fully featured Ship Editor for you to play with as part of this free update!

Design your own ship from the ground up using a detailed voxel editor. Position the afterburners and weapons, set your own attributes to govern the ships agility, boost and overdrive, and choose either of the standard weapon sets for your ride.

But that’s not all… what’s a ship editor if you can’t show off your custom rides? We went one step further and fully connected the editor online. Share and download ships from your friends, rivals and the community at large, and try out new ships to see what gives you the edge on the leaderboards.

This really is a massive addition to the game, and one that is going to stir up the competition. Being able to tweak ship attributes means the game is tactically deeper and there are tons of new tricks to make that high score bigger. If you can think of anything better than saving the last humans while piloting a flying ninja unicorn ship then I’d like to hear about it.

We’re really excited to see what you guys come up with in the editor, and we’ll be right there online sharing our own ships.

Another much-requested feature is local co-op; the good folks at Housemarque have heard you, and they’ve added that to the expansion too.

We love a good Trophy set, and we’re really proud that so many of you achieved the Platinum after the game launched. We worked long and hard to make a set that was challenging yet attainable, and we’re thrilled that for many players, Resogun was their first PS4 Platinum.

Because we like Trophies (and because we like to spoil you), we’ve added more of them to not only the forthcoming expansion, but also to this free update!

This is another great reason to come back to the game and improve your score. Again, these have been designed to make you play with the new additions to the game. While challenging, they should be achievable for most of you with a little bit of effort, but if you need a little help we’ll be back in a week or two with an exclusive Trophy guide for both the Heroes Expansion and the Update, created by one of our very own QA team. Keep your eyes on the Blog for that in the near future.

Since release, we’ve seen you battling it out for the top scores on the leaderboards. Some players blew our minds in terms of the scores they could achieve, and others… well some surprised us with the discovery of some really sneaky exploits, like this:

I bet you thought we weren’t watching, huh? ;) So with the huge amount of changes brought about by the editor and assignable attributes to ships, we’ve spent some time ironing out the main game and fixing some of the exploits where we could.

With that in mind we’re left with little option but to clear the leaderboards and start fresh alongside the release of this update. That being said, we didn’t want players’ superhuman efforts to be forgotten, so we’ve added a Hall of Fame Leaderboard to immortalize the original Resogun Heroes. All scores in the Main Hero difficulty leaderboard will be forever displayed here to show future generations the level of skill (and in some cases sneakiness) that was shown by our community in the early months of Resogun.

And with that, I’m out of here. We’ll be back on the Blog in a couple of days with more information about the Heroes Expansion pack. In the meantime, enjoy the update and thanks again for all your support for Resogun.

To all the Heroes, we salute you – now get out there and save the last humans.