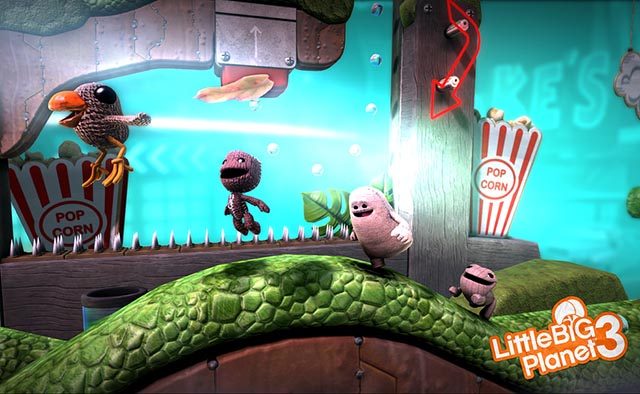 One of the big surprises of E3 week was seeing LittleBigPlanet 3 unveiled live on stage during the PlayStation media briefing. If you haven’t got yourself up to speed already, Sackboy is all set to make his PS4 debut this November. Along with a raft of new features for Create mode, the major new additions to the series come in the form of three new playable characters: Swoop, Oddsock and Toggle.

“We’ve spent a long time working on the characters,” explained XDev’s Pete Smith backstage at LA. “Not just making sure that they look distinctive but also that they each offer unique gameplay. That, for me, is the big thing. We want people to go ‘Wow, they really change up the game, and I can create totally new experiences with them’.

“We were also keen to make sure that they were very iconic from a silhouette point of view, so that when you look at them together you can instantly tell them apart. Yet we still wanted them to feel like they were part of the Sackboy family, rather than just a watered down version of the same character.”

Indeed, having played through hugely enjoyable E3 demo a few times over, I can confirm that they really inject fresh energy into the series, opening up all manner of possibilities both for the developers and the community. It’s no exaggeration to say that the biggest smiles in the SCEE room at E3 could be found in the LBP area, where groups of players gleefully egged each other on in four-way co-op as they got to grips with Sackboy’s new pals.

Want to find out more? Pete talked us through each character in turn, explaining how they came to be and what their individual attributes are.

Swoop
“Swoop was the first one we came up with. He has a specific purpose – Swoop can fly, and he can access hard to reach places. One of the most useful things with Swoop is that he can pick things up – objects, but also the other characters, with the exception of ‘big’ Toggle.”

Oddsock
“Then there’s Oddsock, who’s a four-legged character. He’s not quite a dog; he’s more… well, he’s just an odd sock! Oddsock can wall jump and wall slide, and is really fast.”

“Once you play the Oddsock levels and start nailing your jumps, it’s really fluid and much quicker than the familiar LBP gameplay. It’s a very different experience – we didn’t just want him to be Sackboy on four legs, we wanted him to be his own unique character.”

Toggle
“Finally we’ve got Toggle. Toggle can be big, or he can be small. Toggle started off as just one character – big Toggle – but it didn’t quite give you enough combinations, and that’s what LittleBigPlanet really needs.

“What we like in LBP is that we want everything to be very intuitive, so when he’s big he’s strong and heavy, and when he’s small he’s light and quick – it’s obvious. When you play the game it feels really natural – you’ll instantly know where to use him, and it brings in a nice puzzle element.

“He also brings with him a hell of a lot of gameplay possibilities, especially when you start using some of the customisation features.”

The ones that got away
“Early on we had loads of different ideas. I was looking at some of the concepts the other day actually. The Sackworm didn’t last too long before he found himself on the cutting room floor!

“They all started out as silhouettes. They needed to be game changers, they need to be fully customisable, they needed to feel like they belonged in the world, and they needed to have personality. I think the final three characters have really struck that balance.”

So, which one have you taken a shine to? Let us know below, and look out for more updates on the game as November approaches.