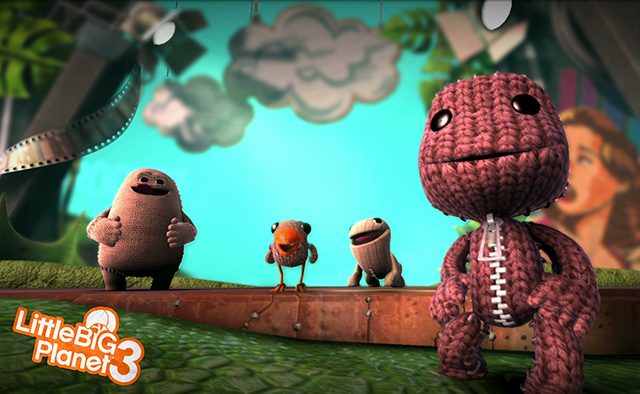 Greetings everyone! After keeping our lips sealed for such a long time I’m pleased to finally be able to tell you what we’ve been up to in the imaginative world of LittleBigPlanet. Today we announced that LittleBigPlanet 3 is coming to PlayStation 4 this November!

Sackboy is back and for the first time ever joined by three new friends – OddSock, Swoop, and Toggle. Each one of these new playable characters has unique abilities, which brings new dynamic gameplay and expands the inventive possibilities in Create mode.

All the new characters are, like Sackboy, fully customizable and there will be plenty of quirky new costumes to collect in the game so you can express your own individuality.

Speaking of Sackboy – what about him? Well, our favorite knitted knight has been equipped with an all-new climbing ability and loads of brand-new power-ups including the amazing Pumpinator!

You’ll need the power of all four of these heroes as you explore all corners of the Imagisphere, meet the inhabitants of the mysterious planet Bunkum and face the nefarious Newton as he attempts to destroy a world filled with creativity.

And there is a sack-ton more; we’ve added even more features and are excited to tell you all about them in the months to come. As a kick off, we’ve added creative layers for increased depth in the game world so Sackboy and friends can now jump in and out of the screen right before your eyes, climb up stairs, skate down slides and zip-line on a puffy sponge! Getting to see some of the new gameplay in action is the best way to show you what’s new, so we’re excited to share with you this exclusive trailer we made to celebrate the announcement of LittleBigPlanet 3:

We hope this gives you an idea of the endless surprises that await you LittleBigPlanet 3. If that wasn’t enough, we’ve also made the millions of inventive levels generated within the LittleBigPlanet community so far to all work on PlayStation 4. There’s over 8.5 million, which you can enjoy from Day 1 and they all look better than ever on PS4.

And if you’re feeling inspired, flex your creative muscles with a whole bunch of new tools and tweaks which will allow the creators among you to create fresh experiences for the rest of the community to enjoy.

LBP3 is an excellent showcase for PS4, featuring innovative support for the DUALSHOCK 4 wireless controller, stunning 1080p graphics and the ability to broadcast creations and gameplay clips with a touch of the SHARE button.

This is just a glimpse at some of the surprising new things in LittleBigPlanet 3. We can’t wait to tell you more later!